The Cranberries star’s funeral in her family church, filled once more with the singer’s music, including duet with Pavarotti. 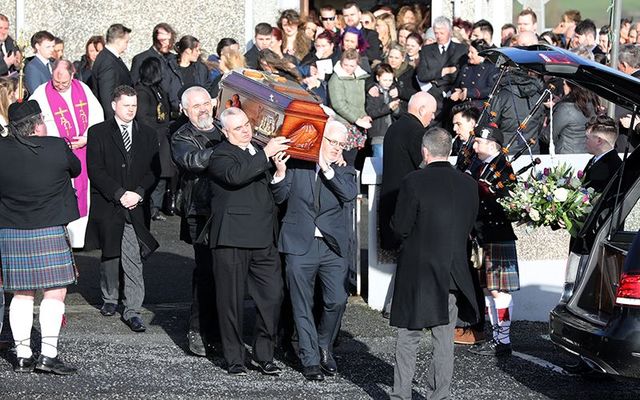 The coffin of Dolores O'Riordan carried out of her family church, in Ballybricken, County Limerick. RollingNews

The Cranberries star’s funeral in her family church, filled once more with the singer’s music, including duet with Pavarotti.

There were emotional scenes in Ballybricken, County Limerick, this morning as hundreds gathered for the funeral mass of The Cranberries singer and songwriter Dolores O'Riordan. The service in her family’s parish church opened with a duet of “Ave Maria”, the Limerick star had performed with the late Luciano Pavarotti.

Poignantly O’Riordan’s funeral mass took place at the Church of Saint Ailbe, in her hometown Ballybricken, where she had sung in choir as a child.

O’Riordan (46) was found dead on Jan 15, at 9am, in her hotel room, at the Hilton, on Park Lane, in London. The police are not treating her death as “suspicious”. An inquest into her cause of death is set for April 16. 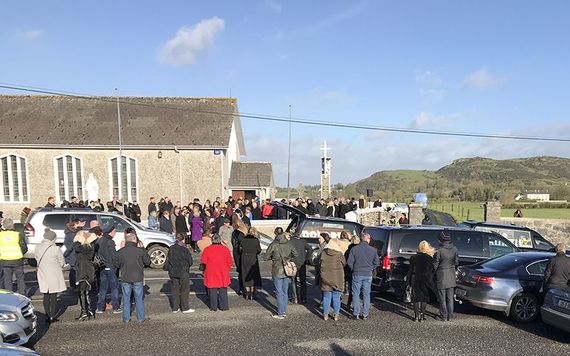 Crowds gather outside funeral of Dolores O'Riordan, at the Church of Saint Ailbe, in Ballybricken.

Present at the funeral was O’Riordan’s ex-husband Don Buron and their three children – Taylor, Molly, and Dakota along with the star’s mother, Eileen, her sister, Angela and four brothers - Terence, Brendan, Donal, Joseph and, PJ. Also present was O’Riordan’s boyfriend and fellow member of the band D.A.R.K Ole Koretsky, who she had been living with in New York.

During the funeral Canon Liam McNamara said O’Riordan’s singing voice was “worth its weight in gold".

"Her kind personality and beautiful singing voice earned for her numerous admirers,” said the cannon.

"It must be added that the numbers she rescued from the darkness of depression are impossible to count.

"No words are adequate to describe Dolores or to accurately state the influence for good she has been over the years."

McNamara recalled meeting Dolores in 1989 when she was singing and playing the keyboard in church.

He said Dolores always had a “unique respect for everybody" and added that there are "no words are adequate" to describe her.

There was an eruption of applause, inside and outside the church when The Cranberries' “When You're Gone” played as the service came to an end.

Following the service O’Riordan was laid to rest alongside her father, Terence Patrick, at the Caherelly cemetery. Her father passed away in 2011, following a long battle with cancer.