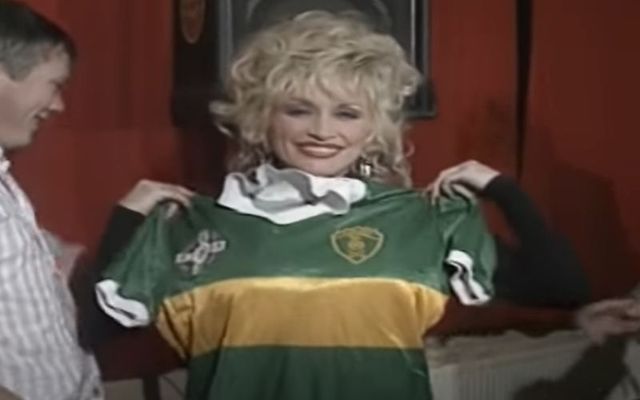 Dolly Parton with a Kerry football jersey during her visit to Paídi Ó Sé's Pub in Co Kerry. paidiosekerry, YouTube

Dolly Parton must have been mistaken if she thought she was going to visit Dingle in Co Kerry going unnoticed.

In the early 90s, the famous country singer made a stop into Páidí Ó Sé’s Pub in Dingle, Co Kerry, seemingly for a quiet night out. This was long before social media would have been abuzz with the impromptu visit, but thankfully cameras were on hand the night that Parton went to Páidí’s pub.

Read More: Moving to Ireland: Why you should live in Dingle, County Kerry

Sporting her iconic blonde curls, Dolly Parton seems more than pleased to chat with the locals in the traditional Irish pub. She nods along with a smile when pub proprietor Páidí Ó Sé introduces Parton in his native Gaelic.

On stage, Páidí said, “The last big night we had here was in 1985 when I captained the Kerry team,” which is met with a round of applause.

“Now we won the All-Ireland, and this is the jersey,” says Ó Sé presenting Parton with a rolled up green and gold top. “And it hasn’t been washed since!”

“I was hoping it has the sweat still in it!” said Parton cheerfully accepting the gift. “I’m honored, thank you very much.”

Parton smiles for pictures while holding up the probably priceless Kerry jersey.

Then, she breaks into a rendition of Coat of Many Colors for the live audience.

She concludes with a bow and says “Well thank you very much, and welcome to Dinglewood!”, a riff on her Tennessee theme park Dollywood.

Have you had any celebrity run-ins in Ireland? Share in the comments!