Dave Bautista explains why he has a Cillian Murphy tattoo

Bautista explained that he thought of himself as a Gentleman Hooligan and wanted some sort of tatt to remember where he came from. 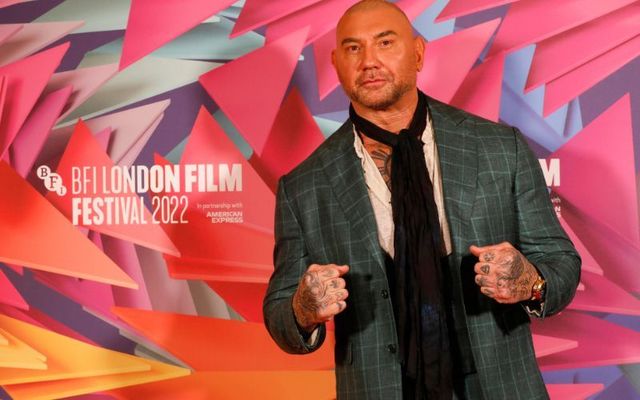 Dave Bautista attends the “Glass Onion: A Knives Out Mystery” Photocall during the 66th BFI London Film Festival at The May Fair Hotel on October 16, 2022, in London, England. Getty

When you’ve got a zillion tattoos all over your body, one slight mistake isn’t really a big deal, right?  Dave Bautista, the actor (Guardians of the Galaxy) and former WWE star would agree, as he’s got a tattoo of Cillian Murphy on his thigh that he was hoping would resemble someone else.

Bautista told the story of his tattoo to GQ magazine, explaining that he was a tough, poor guy growing up who had his share of scraps but always treated people with respect. He thought of himself as a Gentleman Hooligan and wanted some sort of tatt to remember where he came from.

“I found this really cool picture that I love and I always wanted to do this,” Bautista said.  “It was Cillian Murphy from Peaky Blinders, and I asked (tattoo artist) John to alter it so it didn’t look so much like Cillian Murphy. And I got it and I thought, ‘Okay, that doesn’t look exactly like I have a tattoo of Cillian Murphy on my thigh.’”
His millions of followers, though, begged to differ.

“The first time I posted it on my social media, all I got was, ‘Oh my God. You’ve got a tattoo of Cillian Murphy,’” Bautista laughed.

“Well, yeah I guess I do.  It is what it is.  So, you know, a little embarrassed but not ashamed.  So Cillian, there you go. Your face is tattooed on my thigh.”
Sure enough, as you can see, the tattoo is a ringer for Murphy and Thomas Shelby, his character on the popular Peaky Blinders series.