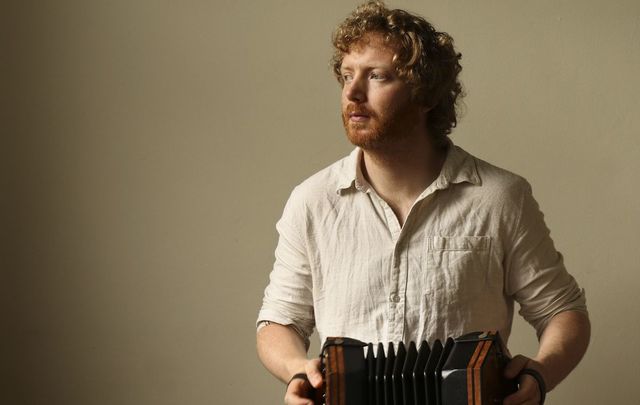 Begley is a bass, baritone, treble and piccolo concertina player of great virtuosity from a legendary West-Kerry musical family. His passionate style of playing straddles both traditional and more contemporary styles. A player of tremendous versatility, he has performed and collaborated with an array of Ireland’s finest musicians. For this special performance, he will be teaming up with friends old and new for an unmissable evening of soulful music.

One of Ireland’s leading filmmaker and broadcaster, Donal Dineen will introduce and chat with the musicians about their performance and delve into the traditions and stories behind their music and instruments.

The St. Patrick’s Festival 2019 boast of a spectacular five-day family program, celebrating the very best of Irish traditional and contemporary storytelling. This year’s theme of storytelling will be interpreted across five days of family-focused events, such as the Festival Parade (which will be streamed live on IrishCentral) and new for 2019, the three-day Festival Village at Merrion Square to inspire family fun for all ages.

Cormac Begley is a bass, baritone, treble and piccolo concertina player from a West-Kerry musical family. He plays in a number of projects including duets including Liam O Connor, Rushad Eggleston, Caoimhín O Raghallaigh and Liam Ó Maonlaí (singer and multi-instrumentalist); a trio entitled ‘Concertina’ (Noel Hill and Jack Talty), and with the band Ré.

He is the founder of the Airt Residential School and the award-winning Tunes in the Church live concert series in Galway and Dublin. In 2014, he received the Seán Ó Riada Award for concertina playing and his playing has been described as ‘a masterclass in timeless musicianship’ by the Irish Times. In 2018, he was shortlisted for the RTE Radio 1 ‘Folk Instrumentalist of the Year’ and his debut solo has received nine 5-star reviews and was shortlisted for the Irish Times Album of the Year 2018.

Liam Ó Maonlaí is one of the most talented, charismatic and soulful performers of Irish traditional music today. But his musical prowess goes beyond his own cultural roots as he blends an eclectic mix of folk, blues, gospel, soul, rock, and more with his amazing vocals and an array of instrumental mastery from piano to flute, harmonica to bodhran.

Since first bursting onto the scene in the 1980s with his band Hothouse Flowers, Liam has captured the attention of audiences, critics and musicians alike. According to "Rolling Stone Magazine" Bono noted the ensemble were the "best-unsigned band on the planet." It is no wonder that Liam remains a "musician's musician" and no surprise he has performed alongside the best of them. As a solo performer as well as the frontman of Hothouse Flowers, Liam continues to wow audiences worldwide reinventing himself with each performance.

Libby McCrohan is a bouzouki player from Dublin. She plays around back Greek bouzouki. Her approach to accompaniment is sensitive, subtle, and rhythmical. She has featured on numerous recordings, including Lisa O'Neill's most recent album 'Heard a Long Gone Song'.

Stephen James Smith is a Dublin poet and playwright central to the rise of the vibrant spoken word scene in Ireland today.  To date, his poetry videos have amassed over 1 million views online.  In 2017 Smith was commissioned by St. Patrick’s Festival to write a new poem as a “celebratory narrative” of Ireland.  The resultant piece ‘My Ireland’ has been viewed over 300,000 times online and was screened at the London Film Festival in Trafalgar Square on March 17th, 2018.

Stephen has performed at high profile events and festivals such as Electric Picnic, Other Voices, the National Concert Hall, the Abbey Theatre (Noble Call) and Vicar Street; alongside luminaries such Oscar winner Glen Hansard, Shane McGowan, Roddy Doyle, Joseph O’Connor, and Shane Koyczan. His poetry is included on the syllabus at Western Connecticut State University and his work has been translated into Irish, Spanish, Slovenian, Polish, Dutch and Italian.  Smith’s debut poetry collection ‘Fear Not’ was released in Autumn 2018, published by Arlen House.