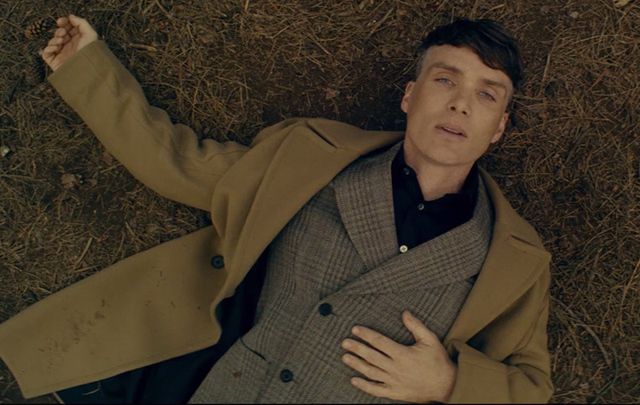 Still of Cillian Murphy in the new "Black Forest" advert for Stella McCartney.

Described as “unsettling and mysterious” by Business Fashion, the ad opens in a forest and we see Murphy alternatively, laying and blinking on the ground and trudging through a forest – his back to the camera.

He then arrives at an outhouse, which changes from merely dilapidated to ablaze within seconds.

Murphy is then seen taking a sprint through the forest, lights flash and the words STELLA McCARTHY flicker above him.

McCartney said that the idea for the video came about when she bumped into both Ellis and Murphy at her menswear launch in London.

She and Ellis used to hang out when they both lived in Paris.

“Guys, we’ve got to do something together,” she told the pair. “Two weeks later, we’re filming in a forest outside London. That’s how we roll at Stella.”

For the soundtrack McCartney turned to a reliable source – her father.

“He did my degree show,” she recalls. “But I didn’t tell many people about that.”

And for this commission the brief was clear, “I want weird sh*t, which you can do, Mr Sgt. Pepper.”