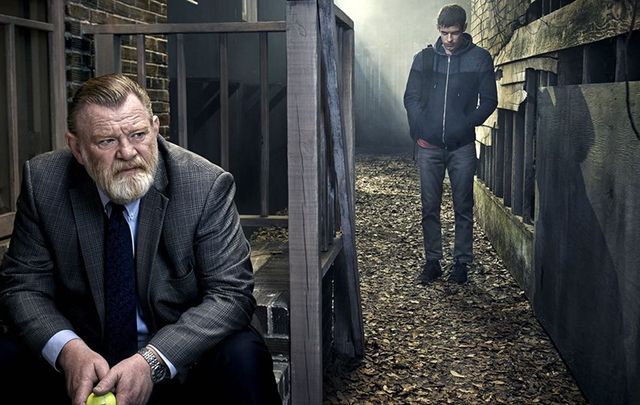 The show, which starts on the Audience Network on August 9, is set in an unnamed U.S. city and is King at his creepiest – and also frequently his funniest – in a tale that is equal parts crime show and horror film.

Tapping the award winning actor Gleeson, who performs the role in his own Irish accent, is an inspired bit of casting because he takes a fairly by the numbers character and turns him into someone infinitely more affecting thought the strength of his own talent.

In Mr. Mercedes Gleeson stars as gumshoe Bill Hodges, an out of shape former detective who isn’t adjusting to his golden years very well.  He’s irritable, unmarried, at war with most of his neighbors and quickly running out of reasons to do more than sit around drinking Budweiser on his couch all day.

That’s when fate intervenes. Two years earlier, we learn, an unhinged killer mowed down a crowd of 13 innocent people with a stolen Mercedes, but the case went cold before Hodges could track him down.

Now retired, Hodges has given up hope of a break in the case, but that’s when he starts to receive taunting emails from the still at large killer.

What’s worse, the emails vanish from Hodge’s inbox the second after he has played the video files, leaving him with only a shocking memory, but no digital fingerprints.

Nevertheless, these horrifying communications put Hodges on notice: the killer is still on the loose, he knows where Hodges lives, he knows his private email address and he knows that the tough as nails old detective burns with the desire to capture him and bring him in.

What makes all this even more unsettling is that we learn the killer likes to dress up in a clown mask when he stalks his victims. We also learn his identity long before Hodges even suspects, throwing us headlong into this cat and mouse game that develops with an even more chilling head start.

At first glance Hodges is an unlikely hero. As Mr. Mercedes portrays him, he’s damaged, introverted, probably clinically depressed and at the loosest of loose ends.

The country he lives in looks like a dysfunctional blue state-red state dystopia, with angry citizens looking for work or looking for someone to take their frustrations out on. Tone wise, the show looks like a snapshot of 2017.

But if Hodges has seen better days he has some major redeeming qualities too: he loves classic Motown, he has a dry as dust Irish wit, and we begin to suspect there’s far more life under that irascible surface than he’s letting on.

Hodges’ next-door neighbor Ida Silver, played to perfection by Holland Taylor, is a mature widow who is still, in her own estimation and ours, a knockout. She knows all of Hodges’ problems – beer, a persistent UTI - from consulting his trashcans.  She watched her own husband die from undiagnosed depression.

“The depression slithered up to his neck like a constrictor, a slow chocking death,” she warns Hodges. Then she shows him a naked selfie that she took with her iPhone.

“Why not get together with me,” she says, “I’m the only one willing to do it for free.”

There’s a lovely film noir feel to Mr. Mercedes, which means that among other things it features a host of strong willed women who startle slack jawed men with their desire, their smarts and their toughness.  Taylor is particularly enjoyable as the straight to the point next-door neighbor who proposes an alliance with Hodges that shocks him with its frankness.

Meanwhile, we know that Brady Hartfield, the nerdy guy who works at an electronics store and is a bit of a whiz with computers, is also a psychopath who is tormented by his alcoholic and abusive mother as well as by his pathetic desire to exert his will on people by taking their lives.

Brady is played by Harry Treadaway, the smolderingly handsome 32-year-old U.K. actor who is completely unrecognizable in his character’s crew cut, and with all the dark lines under his eyes.  Putting the psycho in psychotic, Treadaway is so good it’s unnerving to watch. His incestuous relationship with his mother is also profoundly discomfiting, writer’s shorthand for he’s about to murder a whole bunch of people while laughing maniacally.

Of course Brady has a second job as a -- wouldn’t you know it -- ice cream truck driver. What is it about them, in their little paper hats and see through plastic gloves, that make us think potential felon? King knows what haunts the dreams of suburbia, and he mines it for all of its horrifying possibilities.

Meanwhile, Gleeson’s character has good reason to beef up his home security. The killer is contacting him, taunting him, photographing him without his knowledge and leaving warning signs around his property, all in an apparent desperate need for attention.

Hodges is, like writer King, technology challenged. He can just about send and receive email, and so he invites the help of local kid Jerome Robinson (Moonlight’s Jarrel Jerome), the Harvard-bound teen that knows computers inside out.

Getting involved in a case when you are no longer in active service is asking to be smacked down by the powers that be, but Hodges can’t or won’t help himself. He’s too much of a career detective to let a hunch go when he has one.

What propels Mr. Mercedes is Gleeson’s fine character work, bringing flawed humanity to a horror flick.  Between the shocks and the compelling characters, this is an uncommonly diverting new thriller series featuring one of the most admired actors currently working.

Treadaway makes us see two things in Brady: how dangerous he is and how he got that way, which makes him more terrifying in my book. And Gleeson has admitted it wasn’t the horror that attracted him to the role; it was the fact that every main character is haunted in some way by their own difficult pasts.

“I’m not particularly interested in the supernatural as a source of terror,” Gleeson told the press. “What’s amazing about this is that it’s about the beast within. They’re all haunted, but haunted in a very human way.”

In one terrifying echo of real life, in the original book King had his character attend a boy-band concert with a nail bomb attached to his vest to carry out a terror attack, disturbingly anticipating the real-life attack at an Ariana Grande concert in Manchester in May.

The producers of Mr. Mercedes have, out of respect for the city, changed the details of their own story line for the television series, but they will still show how “lives are destroyed by one heinous act,” they announced.

If the first series of the show does well the producers plan to continue screening the two sequels that King wrote to his 2014 novel. And if it’s based alone on the bruised but not defeated performance of Gleeson, it looks like it’s going to be quite a ride.