Forget "Darby O'Gill and the Little People!" This film has all the leprechauns and banshees you need

A perfect Leprechaun/Banshee Irish movie to watch as we get closer to Halloween. 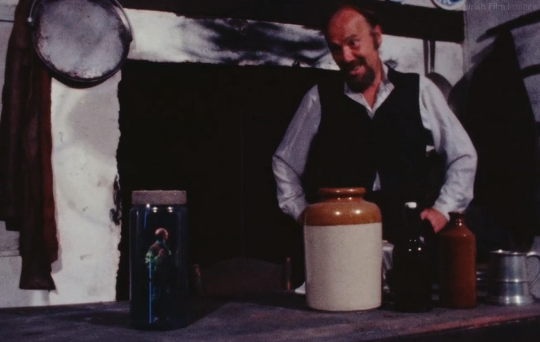 A shot from "Brady's Bargain." IFI

In "Brady's Bargain," leprechauns and banshees showcase the best of Irish myth and folklore.

Forget "Leprechaun" or "Darby O'Gill and the Little People," this Gothic Films produced short directed by Roy Spence is the very thing you should be watching as we get closer to Halloween.

Available to view on the Irish Film Institute Player, it follows the story of Brady who has spent his life trying to outsmart the leprechauns and his big chance comes when he manages to capture one. Keeping the little man a prisoner, he starves the leprechaun until he reveals the secret of his wealth. Armed with this knowledge, Brady sets off across the moor to make himself a very rich man.

The 22-minute short was directed by Roy Spence, an award-winning amateur filmmaker. For the past 50 years, Spence has been making and screening a series of remarkable and sometimes eccentric films in his cinema in Comber, Co. Down.

The films span many genres from sci-fi to horror to folk-life documentaries shot between 1965 and 1986. His collection of over 40 films (13 documentaries/non-fiction and 29 fiction feature films) is held and preserved in the IFI Irish Film Archive. To watch more of the Roy Spence Collection click here.