IrishCentral has two tickets for its readers to the 92nd annual Boxing Writers Association of America Awards dinner on March 16. 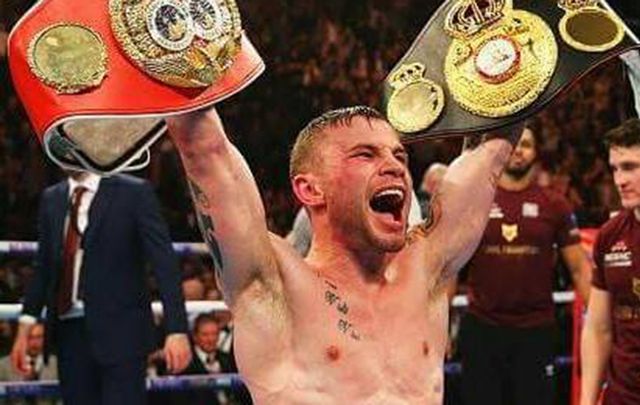 Carl "The Jackal" Frampton, will be the first Irish fighter in the 79-year history of the award to be named the Sugar Ray Robinson 2016 Fighter of the Year.

The Boxing Writers Association of America (BWAA) has announced that its Sugar Ray Robinson 2016 Fighter of the Year is Carl “The Jackal” Frampton, who made history by becoming the first Irish fighter in the long, prestigious 79-year history of the award.

Frampton will be honored at the 92nd annual BWAA awards dinner on Thursday, March 16, at Capitale, on 130 Bowery, in New York, New York. Further information can be found on BWAA.org and tickets can be purchased through Gina Andriolo at Ginaandcom@aol.com.  No tickets will be sold at the door – but IrishCentral has two tickets to give away to the dinner. Like and share this post on IrishCentral’s Facebook page and be in with the chance to win.

Frampton enjoyed a stellar 2016 campaign in defeating a pair of previously unbeaten fighters, Scott Quigg and Leo Santa Cruz, making history in the process by becoming the first fighter from Northern Ireland to win titles in two weight classes.

“I’m very honored by this,” Frampton said. “It was a great year, 2016. I started by beating long-time rival Scott Quigg at the start of the year. A lot was made of that fight. The fight maybe didn’t live up to expectations, but I showed my class in that fight and I think I won it pretty convincingly. The atmosphere is what I remember most. It was a night that I’ll never forget.

“Against Santa Cruz, I know I was a big underdog. It was my first fight at featherweight and no one really expected me to do much. A lot of people were just hopeful I would put on a good performance and would be enough and Leo would get the win. But I was confident that I was going to beat him. I thought I was the stronger fighter and I thought I would be better at featherweight than I was at 122. It was a great year, but to be the first Irishman to win this is huge. There are a lot of great fighters to come out of Ireland, so it means a lot.”

The defending IBF super bantamweight champ, Frampton (23-0, 14 KOs) added the WBA super bantamweight strap breaking Quigg’s jaw and winning by a split-decision on February 27 in Manchester, England. Frampton then followed that up with a majority decision over Santa Cruz for the WBA featherweight title on July 30, in Brooklyn.

“Winning the BWAA Fighter of the Year is like the Holy Grail for fighters,” said Hall of Famer Barry McGuigan, Frampton’s manager. “We won other awards this year, but this is the big one, which includes all of the boxing writers that know and follow the sport. For Carl to become the first Irish fighter to win this award is incredible. I keep saying Carl has the potential to be one of the best Irish fighters of all-time, so winning this creates a first.

“I’m really thrilled for Carl. This is magnificent news for Carl. I have three sons and Carl is like my fourth son. He’s effectively become the worldwide fighter of the year, beyond dispute, and that’s what I think has been so special about this. The BWAA comes from the writers, which is the greatest honor he can get. It’s the Holy Grail of boxing awards and we’re absolutely thrilled with it.”

“The boxing writers choosing me is like winning an Oscar as an actor,” Frampton said.

Shane McGuigan, Frampton's trainer, will receive the BWAA award for manager of the year.