Geldof told the Guardian that his 25-year-old daughter was "far too funny, too wild really and maybe, maybe a little too clever for her own good." 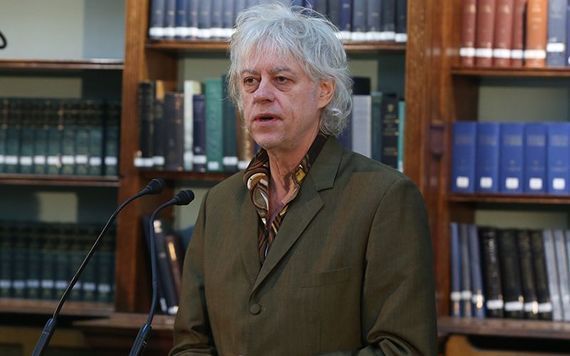 Bob Geldof was speaking ahead of the British release of a new Boomtown Rats documentary. Rolling News

Irish musician and political activist Bob Geldof said that it was impossible to describe the "fug of grief" he descended into after his daughter Peaches died of a drug overdose in 2014.

Geldof told the Guardian that his 25-year-old daughter was "far too funny, too wild really and maybe, maybe a little too clever for her own good."

He was speaking ahead of the release of the Citizens of Boomtown - a new documentary chronicling the life of the Boomtown Rats that aired on BBC Two on Saturday night. The Boomtown Rats also released an album of the same name in March this year, their first in 36 years.

The documentary is packed with cameo appearances from famous fans of the Irish punk band, including Bono and Sinead O'Connor, and also features footage of a young Geldof with his future wife Paula Yates, who also died of a drug overdose in 2000.

Geldof was divorced from Yates when she died, but there is no denying that he still loves her and he talked about watching the old footage of them together in the new documentary.

We loved each other. We were together for 20 years. It was proper stuff, you know? So it was lovely to see her again and to remind people that she was very funny, very smart, very beautiful. She was just great," he said in the Guardian interview.

Citizens of Boomtown provides a fresh look at a fascinating period in Irish history when an increasingly liberal younger generation frequently clashed with their conservative elders during the 1970s when the Catholic Church had an inexorable influence on the Irish State.

The documentary argues that the emergence of the Boomtown Rats was a key part of that fundamental change in Irish society.

"The Boomtown Rats changed the world," Geldof boasted in the documentary and, to a degree, that's true.

The band helped to bring rock music to the mainstream in Ireland at a time when ultra-conservative pop tunes dominated the charts and the dance halls. In an era of Catholic oppression, the band represented the typical rebel without a cause.

Told predominately through photographs and archive footage, the documentary also chronicles Geldof's role in organizing LiveAid - a huge benefit concert raising funds for victims of famine in Ethiopia in the 1980s.

Geldof additionally talked to the Guardian about the famous concert.

Geldof said that the concert wouldn't work nowadays because rock and roll music no longer occupies a central part of society.  He said that music is in the background of modern life and said that online fundraising concerts set up during the COVID-19 lockdown do not work.

One World: Together at Home, for example, was described as this generation's LiveAid, but Geldof believes that the two events are incomparable.

"They’re [online fundraising concerts] really hopeless. I don’t think they work at all. Plus I wish people would stop doing acoustic cover versions of rock and roll songs. Play them the way they were meant to be heard."

Geldof said that his own lockdown has been quiet and uneventful and that he has never mowed his lawn or washed his car so much.

He also said that he doesn't know if society will ever return to normal when the pandemic is over.

"I don’t personally think people will feel safe about people trapped in a closed space with other people for a long while."