Bell X1 and Dowry Strings perform as part of the 'Courage' live stream concert series presented by Other Voices in Ireland this Thursday, July 23 - tune in here! 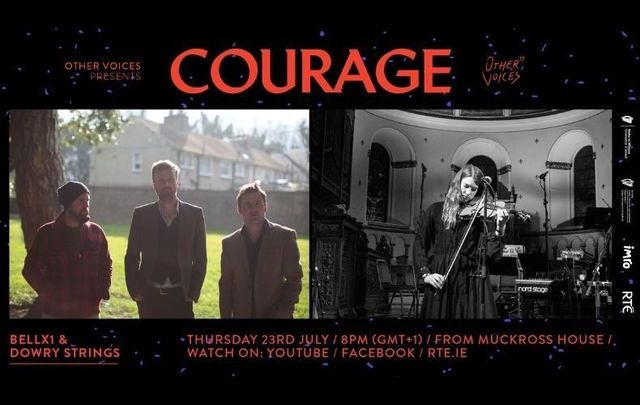 Bell X1 and Dowry Strings perform this Thursday, July 23 for the final installment of the second series of 'Courage' presented by Other Voices - tune in here! Other Voices

Bell X1 and Dowry String feature in Thursday's 'Courage’ live stream concert, the final one of the second series, presented by Other Voices.

Bell X1, one of Ireland’s best known and most loved alt-rock bands, will be joined by Dowry Strings, the quartet led by violinist, composer and singer-songwriter Éna Brennan (Dowry), on Thursday, July 23 for a live performance from Muckross House in Killarney, Co Kerry.

The performance, the next installment of the 'Courage' series presented by Other Voices, will be live-streamed here on IrishCentral as well as over on our Facebook page on Thursday, July 23 at 8 pm IST / 3 pm EST.

Lots can happen over 20 years, take Bell X1. Nearly a quarter of a century ago, the three men at the core of this Irish music institution dusted off the ashes of Juniper following the 11th-hour departure of Damien Rice. Without fanfare, they decided there was no point wasting the body of songs and musical connectivity they already had and that they might as well forge ahead.

Two decades later, they find themselves in a position even they could never have imagined. It is a unique territory in the Irish rock landscape – a household name, yes, but still keenly relevant and critically lauded. What’s more, Bell X1 remain restless and fidgety at a point in their career when most acts, should they dream of even hanging in that long, tend to narrow their field-of-vision and consolidate their legacy.

Time has also brought Paul Noonan, Dave Geraghty, and Dom Phillips their fair share of dead ends and false scents because that is what living entails. It has resulted in a supporting cast of all-sorts, friends and bandmates and fellow travellers on the same road, some that stayed the course, some that peeled off on their own route and some that were taken away far too early.

Conquering radiowaves and arenas is all very well, but more salient destinations have been arrived at. Music that threads itself through lifetimes like punctuation marks. A first dance at a wedding or a song of remembrance at a funeral. Pogoing indie-disco dancefloors and nights your aunt wouldn’t approve of. A tender scene in a hit US TV series and scores of babies named “Eve” because a few descending piano chords and a warm bassline can seem so beautiful on the right night that they transcend mere sonic vibration. National-treasure status has been awarded for less.

The signs were apparent all the way back in 2000 when the then-quartet released their Neither Am I as a means of planting a flag in the ground, something their burgeoning fanbase could clasp in their hands. There was a controlled power beneath the lilts, shuffles, and snarls. Temperatures fluctuated track-by-track and a beguiling maturity behind the eyes was suggested. It got Bell X1 airborne, which might be all you could ever really ask of a debut album, albeit one that the years have been kind to. Island Records snapped them up and the band were engorged within a London scene of moneyed music-industry clout and growing attention from the ever-fickle UK music press.

Music In Mouth (2003) rocked and swooned its way into glowing reviews and swelling live dates. Hard-edges – see the paranoid thrash of ‘White Water Song’ – sat smoothly alongside the aforementioned baptismal beauty of ‘Eve, The Apple Of My Eye’. There was nothing for it but to strike while the iron was hot.

Flock was released in Ireland in late 2005 and shot to No.1. Muscular singles – ‘Flame’, ‘Rocky Took a Lover’ – were snatched at by radio stations where they remain on heavy rotation to this day. Three years later, the record would be used as a greeting gesture to US audiences and no better man for the job. Bell X1 were now a multi-platinum-selling act who could fill arenas at home and find very warm welcomes across the global touring map.

Tour de Flock (2007), a recorded commemoration of their triumphant sell-out Point Theatre homecoming, was a logical encore for that heady passage of their story. Grainy YouTube footage exists of the band performing ‘Rocky Took A Lover’ on The Late Show With Dave Letterman in 2008.

There is survival of the fittest, but there is also that of the dogged, the daring, and the artistically resolute. Any outfit simply can’t negotiate such fundamental structural change without these qualities. Enter Blue Lights on the Runway, Bell X1’s first long-player on their own independent label. Among its tracklisting nestled a song called ‘The Great Defector’ which would go on to become one of the biggest Irish singles of all time. Kids of all ages, it turned out, were partial to ‘The Great Defector’’s cartwheeling hook and giddy arpeggios. To this day, it remains on constant rotation on Irish airwaves. “Fantastic,” Letterman bleated after a return visit to The Late Show studio.

Fifth LP Bloodless Coup is recorded more-or-less live (save some minimal overdubbling) in Grouse Lodge with Rob Kirwan (Depeche Mode, PJ Harvey, Hozier), an old friend from the Juniper days. Rory Doyle and Mark Aubele are inducted on drums and keys/guitar, respectively. The first album track they chose to release to fans? ‘Hey Anna Lena,’ an achingly gorgeous digital bath of glitches and programmed beats that was unlike anything they’d ever put out.

Two weeks is all it took to bring Chop Chop (2013), one of the most critically gushed-over Bell X1 records, into the world, a symptom of the three-piece feeling “strong” and “cohesive” while also flourishing in a new collaborative environment. It duly crashed into the top of the Irish charts.

Much has been made of the fact that follow-up Arms (2016) was the group’s “difficult seventh album” – it took two years to record compared to Chop Chop’s two weeks – but like everything about Bell X1, all that mattered was the music that came out the other side. In the case of Arms, that was something very special indeed. Silken of texture and prone to beguiling purrs of pop brilliance, Arms (2016) is a career-high at a stage when Bell X1 should really be in creative decline and putting their energies into being a nice obedient heritage act.

After 20 years of hit singles and naming babies, they owe us nothing. Somehow, however, you get the feeling we’ll be having this conversation again in years to come.

Dowry Strings is a quartet led by Éna Brennan, also known as Dowry, specialising in cross-timbral and cross-genre collaborations. Over the years they have had the pleasure of working with German electronic artist Chrisian Loffler as well as Irish musician Colm Mac Con Iomaire.

Dowry Strings have worked with Bell X1 for over two years now, re-imagining well-known songs from their back catalogue. They have begun to write new material together and look forward to going back on tour in 2021.