Michael Flatley may not have that Irish dance world record for long if this young Irish dancer has anything to do with it. 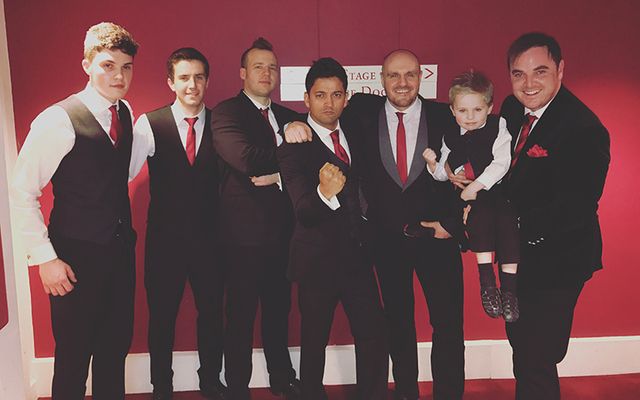 He may need to be held up in this photo but put this young Irish dancer Oscar Donnelly on a stage and he can more than stand on his own two feet. Donnelly family.

When we first met young Scottish lad Oscar Donnelly, he was a four-year-old Irish dancer with such talent that nothing but great things could lie in his future. Just over a year later and Oscar, now aged 5, is bringing his Irish dance to the stage with Cherish the Ladies at the Royal Concert Hall in Glasgow to perform, unfazed, to a crowd of 2,300 people.

Taking to the stage at the Celtic Connection Festival in the Scottish city, little Oscar showed that the future for Irish dance is more than safe with him around, even given last year's retirement of the “Lord of the Dance” himself, Michael Flatley.

Not put off by large numbers of people in the audience, the five-year-old Irish dancer took every step in his stride, undaunted by his new stage.

Uploaded by Irish dance troupe Fusion Fighters, they also caught a glimpse of the young lad practicing backstage in a video which has now been viewed over 42,000 times. We can’t imagine how much work he’d have to put in to get his moves this perfect.

The extent of his pure talent can be seen in the video below where he adds his own self-choreographed steps to the set dance "The Kilkenny Races" at a speed of 110 BPM (beats per minute).

If, like me, you have no means by which to put that into context, it’s very, very fast for someone so young and is a speed that most Irish dancers will not attempt until they are teenagers, at least.

Donnelly dances for the Stephanie Duff School and first put on his Irish dance pumps when he was three years old. He’s had great success so far, thanks to his obvious talent, but he’s still so young that even being old enough to compete at the World Championships is at least six years away.

If you need a reminder of just how great Oscar was even as a four-year-old, here’s the original video taken at a school feis: