50,000 Irish dancers and guests in Dublin and Belfast for rival World Championships 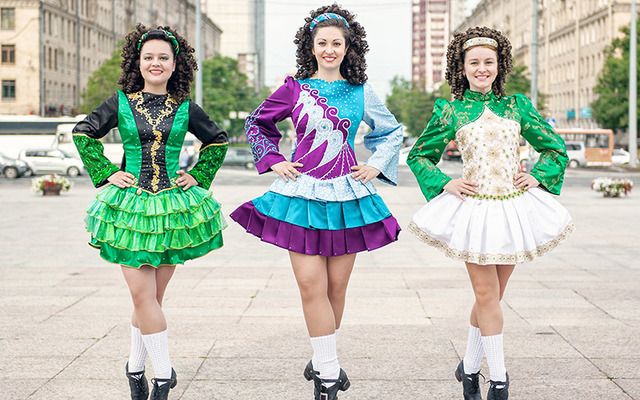 Both Dublin and Belfast are awash with Irish dancers this week as separate international competitions descended on the Irish cities, bringing with them thousands of talented young dancers and their families. Dancers from all over the world are expected.

The World Irish Dance Championships organized by An Coimisiúin de Rincí Gaelacha (Irish Dancing Commission) will welcome 25,000 visitors to Ireland’s capital city with dancers facing off to win the title of world champion. Competitions will take place at the Citywest Hotel in Dublin until Sunday.

There will be some 5,000 participants ranging in age from eight to 30 years old, while five times as many will come to watch competitions including traditional solo step dances, figure choreography team dancing, dance drama (story-telling through dance) and céilí dancing. They will travel from as far away as the United States, Canada, Russia, Japan and Australia to compete in the annual competition.

13 students from the Beglan Academy of Irish Dance will travel to Dublin next month for the World Championships. pic.twitter.com/4mRUr1HtEE

While the event will welcome thousands from overseas, An Coimisiúin has made a plea for more local support, especially from state broadcaster RTÉ which announced it could not cover the competition.

"We have a lot of competitors coming home from places like America, Canada or New Zealand," said Orfhlaith Ní Bhriain Uí Ruairc, PRO of An Coimisiúin.

"We need to make our community more aware of it again.

"We're going to have 25,000 visitors here in the space of a week, celebrating Irish music and culture – I think that's newsworthy," she continued.

"I think sometimes the prophet isn't appreciated in their own land, when we go to Montreal or Scotland or wherever, people are breaking down the doors to get in, perhaps because it seems more exotic.

"It'd be great if the national broadcaster was here, but there's still time.”

"If it was the world championships in a sport that involves moving a ball around a pitch, RTÉ would have wall to wall coverage,” one critic told the Irish Independent.

"RTÉ has, to date, received no complaints or feedback from the public in relation to coverage of this event. "Unfortunately, RTÉ does not have the resources to cover all national events taking place throughout the country,” said a spokesperson from the broadcaster.

"However, we would like to wish the organizers the very best with the championships."

Meanwhile, in Belfast, An Comhdháil World Irish Dancing Championships 2017 will finish up today after a week of 42 competitions and 5,000 competitors. Now in its 47th year, this was the first time the championships were ever held in Belfast and local hotels have been joining in the fun, urging the ever-practicing Irish dancers to save their steps for when they’re safely out of the elevators!

The competition is taking place in the Waterfront Hall in Belfast and competitors from the US, Scotland, England, Europe, Japan, the UAE, Australia and all over Ireland are attracting another 25,000 spectators.

"The An Comhdháil World Irish Dance Championships is the premier event for our organization," said Matthew Donohoe, the event's chairman.

"The dancers that will compete here have been preparing for many months to showcase their exceptional talent."

Speaking to the BBC, Florida dancer Stephanie Lovetere explained how she had at first started with ballet.

"But I found an Irish dancing school and I've always loved watching 'Lord of the Dance' and 'Riverdance,'" she said.

"I really just wanted to get involved, especially since I'm part Irish, so I wanted to do sort of a heritage thing and I just got reeled into the competitive world.

"Quite a lot of people in the United States are involved in Irish dance."

An Coimisiun has a wider reach with many more schools, events and competitions overseas, especially in the USA. An Comhdhail tends to be more focused on the Celtic Nations and England.

An Comhdhail often performs dance steps on traditional dances 'by the book.' Both organizations restrict younger dancers going 'en pointe' to minimize any damage to the foot. However, there are make-up restrictions for young dancers competing through An Comhdhail but definitely not with An Coimisiun.