Stars from across music, film, sport and civic society will assemble in Belfast for the 2020 Gradam Ceoil music award. 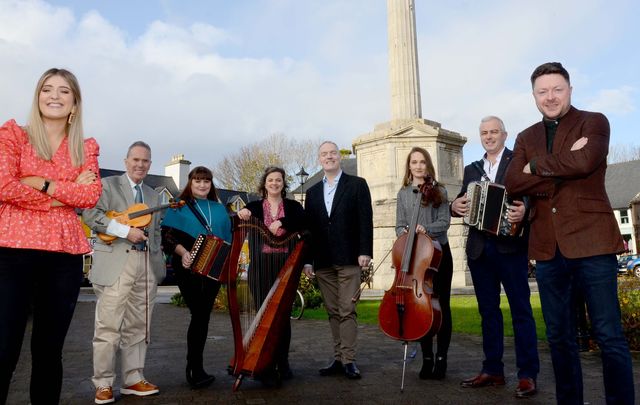 Stars to assemble in Belfast for the 2020 Gradam Ceoil music awards.

Some of Ireland’s most notable stars from across music, film, sport and civic society will assemble in Belfast for the 2020 Gradam Ceoil music awards, taking place at the Waterfront Hall on Sun, Feb 23.

The internationally acclaimed traditional Irish music award ceremony, Gradam Ceoil, will welcome an array of prestigious guests including Line of Duty’s Adrian Dunbar, GAA Presidential Candidate Jarlath Burns and Minister for Communities Deirdre Hargey. Trad sensation Beoga, who collaborated with Ed Sheeran for his 2017 chart-topping hit ‘Galway Girl’ will also take to the stage alongside the 2020 award recipients for what is set to be the biggest Gradam Ceoil to date.

Beoga talked about their upcoming performance and return to Belfast: “We are delighted to be involved in the 23rd annual Gradam Ceoil TG4 traditional music awards celebration. We are proud to be associated with such a prestigious event that celebrates highly-talented Irish and international musicians and we can’t wait to take to the wonderful Waterfront Hall stage on 23rd February.”

“It is shaping up to be an incredible showing of the best in Irish traditional music, and we look forward to playing in Belfast on the night.”

Fiddle and Cello player, Sharon Howley, from Kilfenora, Co. Clare has been selected as the 2019 Young Musician of the Year, having been immersed in traditional music from a young age with a rich musical lineage.

Lillis Ó Laoire, a two-time winner of the premier sean-nós singing competition Corn Uí Riada in 1991 and again in 1994 is to be awarded the title of Singer of the Year.

The other award recipients are Lifetime Achievement Award to Séamus Connolly, Outstanding Contribution Award to Nenagh's Ned Kelly and Composer of the Year to Josephine Marsh.

The showcase kicks off with a multitude of FREE fringe events throughout Belfast City from Thursday 20th – Sunday 23rd February.

Included in the program of events is an exploration of contemporary Irish harp accompaniments to Gaelic bardic poetry with Lauren O’Neill at the famous Sunflower Public House. Attendees can also take a musical journey through outer space where children will learn new songs and dances at Cultúrlann and avail of the opportunity to soak in the sounds of amazing young traditional Irish musicians at St George’s Market. From tours, trad trails, sessions, recitals, exhibitions and much more, there is truly something for everyone in this year’s fringe event.

Tickets for TG4 Gradam Ceoil Awards 2020 are still available from www.waterfront.co.uk or via +442890334455, and will be made available to purchase from The Waterfront Hall box office on the day of the event.

TG4 Director General, Alan Esslemont, spoke about the fringe event: "Gradam Ceoil TG4 is 23 years in existence, and recognizes the best of traditional Irish music, an initiative that TG4 is immensely proud of. I would like to encourage families far and wide to immerse themselves in this fantastic fringe offering and take advantage of the many free events that are on offer across Belfast City from Thursday 20 – Sunday 23 February.

"Additionally, I would like to congratulate all of this year’s winners.  They are the embodiment of traditional music and song, and we are delighted to award them the highest honor in Irish music."