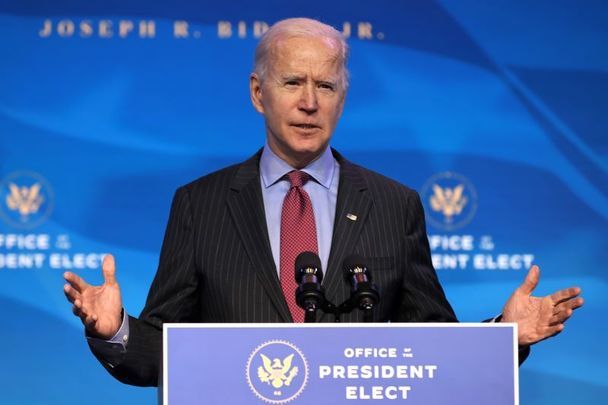 Joe Biden was certified as President by Congress on Wednesday, January 6. Getty

A young Irish singer and actor has released a new song ahead of Joe Biden's first trip to Ireland as President of the United States.

The talented young musician, who is influenced by Christy Moore and U2, captured the excitement in communities in Mayo and Louth, where Joe Biden's Irish ancestors emigrated from as a result of the Great Hunger.

Seoighe anticipates huge celebrations in Carlingford and Ballina if Biden does visit the Emerald Isle during his presidency.

Finnegan from the peninsula

At the tip.of Carlingford lough.

It will be a grand soft day

Coming from the White House

On the furze road make your way

To heaven up in Louth"

Seoighe also draws comparisons with former President John F. Kennedy, who famously visited his ancestral homeland in Ireland in 1963 just months before his death. Kennedy made a historic visit to New Ross in County Wexford during his four-day state visit to Ireland.

Seoighe, who has featured in Irish films like "Black 47" and "Song of Granite", encourages Biden to visit the Phoenix Park, Connemara, the Rock of Cashel, Tara Hill and Newgrange during his anticipated visit.

Biden's election win was certified by Congress last week ahead of his inauguration on January 20.

Biden has hinted that he will make a trip to Ireland during his first official state visit as President and has made two official visits to Ireland in recent years, visiting his ancestral homeland in 2016 and 2017.

Check out Seoighe's jaunty song below.