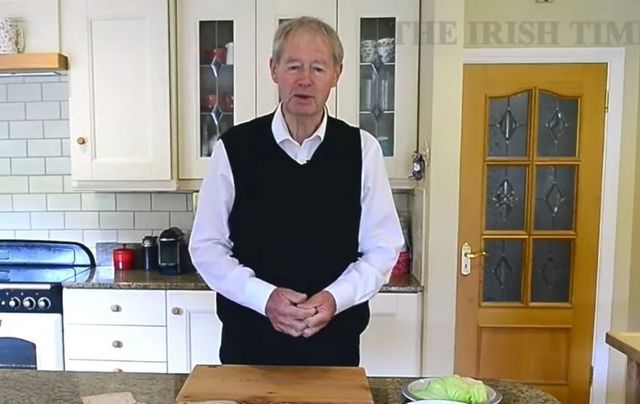 Legendary Irish GAA commentator Micheál Ó'Muircheartaigh went viral on several social media platforms thanks to his bizarre video on how to make a perfect ham sandwich.

The video, originally recorded by Irish Times journalist Bryan O'Brien in 2015, made its way to a Reddit forum in 2016 where it racked up thousands of views since viewers found Ó'Muircheartaigh's voice "relaxing."

One year later, the video went viral again when the Irish Times uploaded it to their YouTube channel. More than half a million people have watched the YouTube upload.

"I'm not a regular sandwich maker," Ó'Muircheartaigh said in the video's introduction. "But if I came in late at night and felt a bit peckish, I'd have no problem making a good sandwich."

Ó'Muircheartaigh's detailed and specific instructions come right down to how to butter the bread properly. The bread, incidentally, has to be brown wholemeal bread, according to the legendary commentator.

"I wouldn't overdo whatever you put on it [butter]. I wouldn't have it coming out at the edges. Just within, sort of like the lines on a football pitch."

A perfect ham sandwich consists of ham that's boiled at home, according to Ó'Muircheartaigh, who believes that store-bought ham just isn't the same.

"I don't like the ones you get in packets or anything like that. They're too thin. They resemble razor blades to me at times," he said.

To complete his perfect ham sandwich, Ó'Muircheartaigh added two small chopped tomatoes for moisture and plenty of lettuce protruding over the sides of the sandwich to add a bit of color.

To finish off the perfect sandwich, Ó'Muircheartaigh slices it down the middle to create two rectangular slices.

Known for his iconic phrases and sayings,  Ó'Muircheartaigh comes out with another classic line in the viral video: "I don't like the modern idea of making two triangles out of it. Bread was never meant to be triangular. It was meant to be square, like a good field."

The Kerry native turns 90 later this month and what better way to mark his landmark birthday than by enjoying one of his perfect ham sandwiches?