IrishCentral contributor Patricia Killeen recalls a trip to the Lisdoonvarna Matchmaking Festival in September 2022 and looks as the famous festival bounces back after Covid. 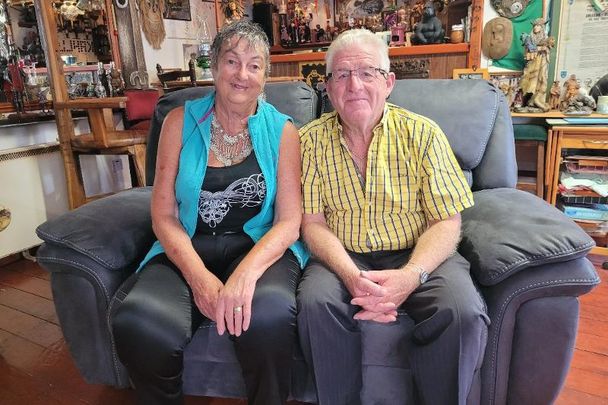 Albert and Cecily Lawlor think the Lisdoonvarna Matchmaking Festival has it all! Julie Carr

Last year, I was in Lisdoonvarna on the eve of the 2022 festival, seeing everything take shape and actually taking part in a soon to be soon released video, for Andy Cooney’s 2021 hit “Looking for Love in Lisdoon."

An incongruous drone camera overflew the quaint town taking aerial photos and as the movie director snapped instructions, Cooney and the musicians beat out the music.

As the sun was splitting the stones, we extras looked like we were having a great time - and we were!

Of course, I also made it up to see Willie Daly, the third-generation matchmaker on his farm and had great fun with him and his daughter Claire before heading off to the nearby Falls Hotel & Spa in Ennistymon (not to be missed).

But then Willie Daly is definitely not to be missed either. After asking my handsome French husband if he had any single brothers or cousins that looked like him as he could easily find them a match, he took down his guitar and regaled us with songs and stories that had us sitting on the edge of our seats.

Willie, apart from his great talent in assisting over 3,000 couples to tie the knot, is a great storyteller. Along with being one of the last traditional Irish matchmakers, it seems he is also one of Ireland’s last seanachies.

By the time Lisdoon was swinging to the sound of dancing feet and original chat-up lines, I was on my way back to Paris, delighted that the 165-year-old festival was back on track. Many people had been worried it wouldn’t get off the ground in September 2022, and even if for logistical reasons, it was a smaller event than pre-Covid, it was wonderful that it actually happened.

Julie Carr, a Belfast woman living and working in Co Clare, has been the PR for the festival since 2014. Before moving into PR, Julie worked as a writer, a journalist, and in television production, and filmmaking remains both a profession and a passion. Carr has worked across many different projects and genres, producing programs for RTE and BBCNI. Recent credits include "At Your Service" (RTE) "Daniel O’Donnell at 60" (BBC) and "Gardening Together" (RTE/BBC).

In 2022, Carr’s love of film and the Lisdoonvarna Matchmaking Festival intertwined when she took on a labor of love and made “Reconnection Lisdoonvarna," a short film about the dancers and dancing traditions of Lisdoonvarna. Her masterpiece was funded by Creative Ireland.

The film opens with Limerick couple Albert and Cecily Lawlor who have been attending the festival for over 50 years. It also features Willie Daly explaining how after the two-year break, people were anxious to find love and he had received many, urgent requests from people planning to come “Looking for Love in Lisdoon."

The two-year break in the festival was devastating for many people who look forward to the festival all year round and as Albert and Cecily Lawlor mention in Carr’s film, the festival “brings the light back into their lives."

We see the couple get out of their car after a 1h30 drive to (and from) the dance floor. Cecily is sometimes seen on a walking aid, but on the dance floor, she glides in rhythm in her husband’s arms. Albert mentions how so many people go for the dancing, some are just dancing partners and not a couple; the happiness on the dance floor jumps off the screen.

Carr explained: “How the tradition of dancing and the connections that were forged in Lisdoonvarna started with the rich city dwellers and bachelor farmers gathering at the spa wells into what has evolved to be one of Ireland longest running festivals.

"For over 165 years, people have been coming to the village, first to take the waters, then to meet, dance, and often fall in love.

"However, two years ago, the music stopped when covid struck. For the village, and particularly the older generation, this was a huge loss and has had a severe impact on their mental health. The annual pilgrimage to the Spa halted and for some like Mick Burke, who attended for 70 out of his 97 years, the journey sadly ended when he passed away during the pandemic.

"Others like Albert and Cecily who met on the dance floor of the Hydro hotel 53 years ago never missed a year either. For them, it was important to keep the spirit of Lisdoonvarna alive during Covid and they made their own makeshift dance floor in the front garden to the amusement of friends and neighbors."

Irish traditions are fantastic, and as Albert says, although he and Cecily have traveled the world, they believe there is nothing like the Lisdoonvarna Matchmaking Festival anywhere else. Of course, they’ve been to many other Irish and foreign festivals, but in their opinion, nothing compares with Lisdoon, which “has it all." The buzz and atmosphere, and everyone chats with everyone.

Albert and Cecily have recovered from seeing Lisdoonvarna look like a ghost town when they visited in September 2021. In Carr’s film, we share their joy on Lisdoonvarna’s 2022 dance floors. Like the Lawlors, we’re already looking forward to the music and dance at the September 2023 Lisdoonvarna Matchmaking Festival – and under the watchful eye of Willie Daly, some will also find romance as they whirl around the dance floor!