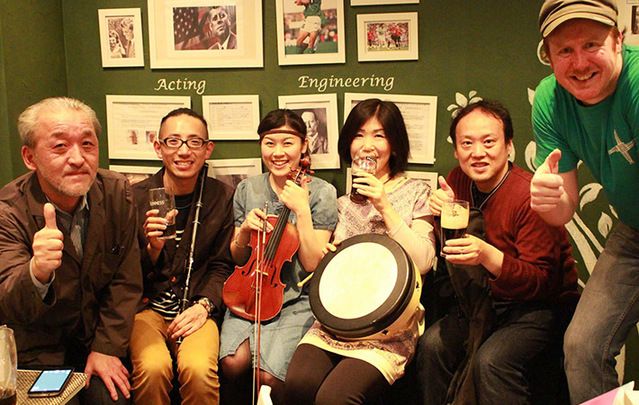 A group of Japanese Irish musicians, along with an Irish restaurant owner in Tokyo, created this video of “The Foggy Dew” to commemorate the centenary of the 1916 Easter Rising.

Alan Fisher, originally from Dundalk, now living in Tokyo, reached out to IrishCental, proud of the video he and his friends had created. Two years ago Fisher opened an Irish restaurant, Kyojin Stewhouse, in Tokyo, where he hosts Irish events and encourages the promotion of Irish culture among the locals.

He told IrishCentral “We'd been chatting for a while about doing some sort of tribute from…So we figured what better way then get some people together and do a cover of “The Foggy Dew.” A song we all loved and that covers the story of the Easter Rising so well.

The beautiful song chronicles the Easter Uprising of 1916, and encourages Irishmen to fight for the cause of Ireland, rather than for the British, as so many young men were doing during World War One.

Fisher explained that the idea of creating this video from Japan came to mind after Yoko Takano had performed at his restaurant, during a storytelling event, after some mails back on forth they settled on an Easter Rising Night, as a celebration, and Fisher suggested “The Foggy Dew.”

“It's amazing the amount of talented Japanese musicians that have fallen in love with Irish music,” Fisher said. “There are so many, but I think the four members in the video would be particularly well known on the Irish music scene here.”

In fact, the flutist from the video, Kozo Toyota, is traveling to Ennis, County Clare, this week (Aug 14 – 22) to compete in the Fleadh Cheoil, with the Toyota Ceili Band. Fisher added “He's collaborated with several Irish musicians whenever they come over and he's the first ever Japanese person to compete at the All-Ireland Fleadh. As I mentioned in my other mail he's actually there again this year with the Toyota Ceili Band.

Fisher arrived in Japan in 2008. His plan was to work in Japan, for an IT, company for two years. He told IrishCentral “Same old story I guess. I met my now wife, Ai Tamura, and sure one thing led to another. We got married in early 2014 and together we started our own business shortly after.”

The Louth man and his family’s restaurant, a center for Irish culture, are garnering some interest in Japan. Here’s a Japanese TV clip which features the restaurant: