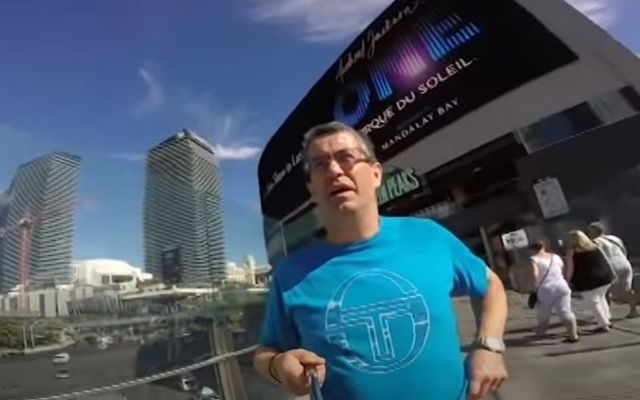 The iconic 2015 video of Joseph Griffin that has racked up almost 10 million views EvanGriffin. YouTube.com

For Father's Day let's take a trip down memory lane and remember the Irish dad with the hilarious Homer Simpson-esque D'oh! moment.

Never forget - the iconic 2015 video of Joseph Griffin that has racked up almost 10 million views in the past six years.

Griffin's son, Evan, gave the Irishman a GoPro to take on his trip to Las Vegas.

The resulting footage 4 minutes 20 seconds of footage from Sin City must be seen to be believed - Griffin spent the entire time recording the iconic American city with the GoPro back to front.

"So... Gave my Dad my GoPro while he was in Las Vegas, I did not, however, instruct him on how to use it, so my dad being my dad, and a culchie, didn't know which way to point the f*cking thing..." Evan wrote on the YouTube upload.

The video gained so much traction that even GoPro themselves reached out with a comment writing, "Classic dad move! Which GoPro was he using? We may have a few accessories that could help him out."
The hilariously awkward video was picked up by outlets including Reddit, BuzzFeed, the Daily Mail, BoredPanda, the Telegraph, and Vice, who called Griffin "the most dad thing to happen to the Internet".

A moment please for the moment when he says, "There's the Trump Tower, same colour as his hair."

DAD JOKES FOR THE WIN!