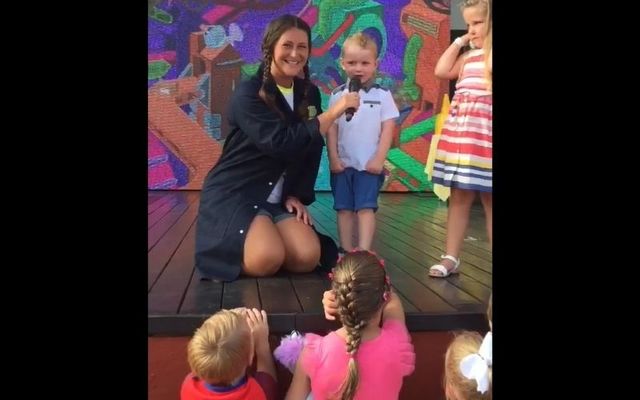 Ruairí McCann sings 'Baa Baa Black Sheep' in Irish, much to the confusion of his audience.

Three-year-old Ruairí McCann had some audience members slightly confused when he sang a rousing rendition of 'Baa Baa Black Sheep' in Irish while on holiday in Spain in 2016.

Connla McCann and her family were on vacation at the Holiday Village in Benalmádena, Spain, when her 3-year-old son Ruairí stole the spotlight with his Irish language version of 'Baa Baa Black Sheep' during one of the live kids' shows.

"On this night they invited kids to sing a song. The host had asked another girl to come up and sing but our Ruairí went up on stage of his own accord (basically bunked her) so she had to let him sing.”

Determined to keep going on his own terms, little Ruairí decided to show off his language skills with a song as Gaeilge, leaving the host and the crowd impressed but confused, to say the least.

Ruairí has learned all his Irish at home with his mother, who is a fluent Irish speaker, but he has also been attending Naíscoil Bhreandain in Belfast, a preschool for Irish speakers.

“He sang the song perfectly taking the host and audience by surprise. Although they didn't have a clue what he was singing he got a massive applause!” Connla added.

“So brave to get up on stage and to sing in Irish. Just goes to show benefits of being bilingual from so young!”

Top energy saving tips to get you through the winter