Jamie Dornan and Chris O'Dowd featured in the compilation video with around 25 different celebrities singing small parts of the famous song. 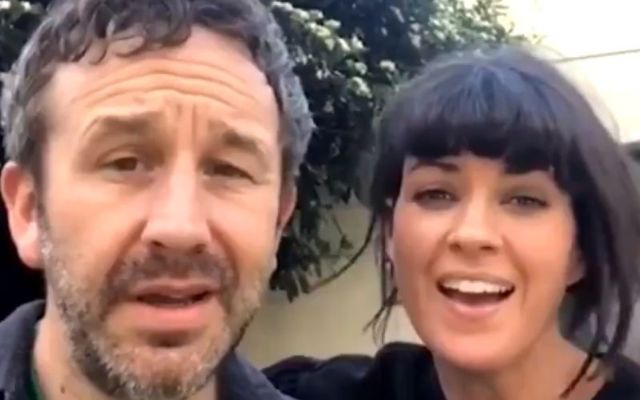 Chris O'Dowd made the ill-fated decision to take part in the Imagine video. @sidetolaufer Twitter

Irish celebrities featured in a misguided attempt to bring harmony to the world during the Covid-19 crisis by singing John Lennon's Imagine.

Actors Jamie Dornan and Chris O'Dowd featured in the compilation video, which featured around 25 different celebrities singing small parts of the famous song.

The video starts and ends with Wonder Woman star Gil Gadot and features a host of other high-profile celebrities, including Will Ferrell, Mark Ruffalo, Amy Adams, Natalie Portman, and Jimmy Fallon.

Jamie Dornan is third to appear in the video, while O'Dowd appears at the 1:22 mark (if you can make it that far).

While the video was undoubtedly designed to make people happy, it seems to have had the opposite effect and has been the source of widespread ridicule and condemnation on social media.

It is undeniably cheesy and cringy and some people felt that a group of millionaires singing about having "no possessions" was somewhat ironic.

Chris O'Dowd seemed to acknowledge the error of his ways and admitted on Twitter that he couldn't bring himself to watch it. He said that he thought he was taking part in a video for charity and not the much-maligned effort it turned out to be.

The song was one thing, but I’m beginning to think the ‘Imagine’ singers worldwide stadium tour might be a mistake.

The Bridesmaids star also responded to a tweet that poked fun at him for taking part in the video. He seemed sufficiently embarrassed by his performance.

"Yup, I'll do anything [Kristen] Wiig asks me to do. I thought it was a charity thing for wee fans of Wonder Woman or something. I literally can't watch it."

Jamie Dornan doesn't have a Twitter account and we can only hope that he would similarly disassociate himself with the video.

Here it is. In all its glory.