Irish television has produced some seriously good commercials in recent years. Click here to see some of our best picks. 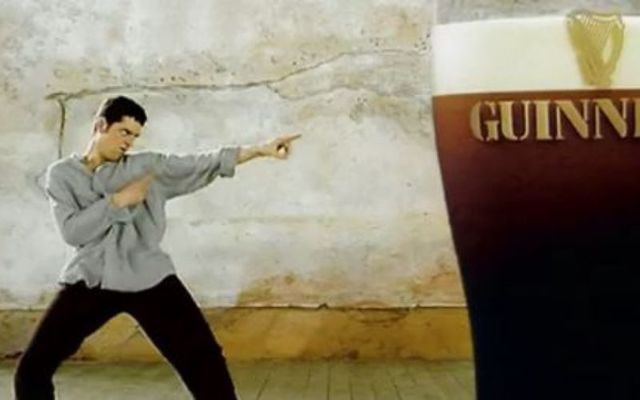 Guinness' Dancing Man commercial is one of the most famous ever produced in Ireland. Breakthrough fun YouTube

Irish television has been a breeding ground for some of the most creative and ingenious television commercials of all time. What these commercials lack in budget, they more than make up for in comedy and character.

These iconic advertisements can come from some unlikely sources. From mortgage appointments commercials to Irish turf marketing, there is really no limit to what Irish marketing teams can produce.

Without further ado, here are some of our favorite ever Irish commercials.

Featuring a strange assortment of Irish phrases you would likely hear in an elementary school classroom, this Carlsberg commercial hilariously highlights the beauty of the Irish language even when the words make no sense.

Some of the most notable lines uttered in this 2007 classic include "tabhair dom an cáca milis" (give me the cake) and "ciúnas bóthar cailín bainne" (quiet road girl milk).

While this advertisement, with its immortalized line of "I don't know what a tracker mortgage is," was undoubtedly funny, it also carried a prescient warning of Ireland's impending economic crash. The commercial is emblematic of Ireland's blasé attitude towards banks in the mid-2000s.

Set on the upper deck of a Dublin Bus, the commercial is ingrained in the memory of anyone who lived through the latter years of the Celtic Tiger.

A modern classic, this EBS Mortgage Appointment commercial is one of the most quotable commercials to ever air on Irish television.

If you say the line "two weeks in Torremolinos" to an Irish person, chances are you'll hear the phrase "gonna be tropic" parrotted back at you and it's all because of this glorious advertisement.

This commercial, entitled "Strangest," is aptly named. Barry's Tea is one of Ireland's most prominent tea companies and went with this unusual campaign in 2007.

The commercial documents a blossoming romance between childhood friends while making tea in the office and the closing line "I don't know, is it?" is one of the most iconic lines in Irish advertising.

Guinness never fail to hit the mark with their marketing and this ad from the mid-'90s is as good as it gets.

The commercial chronicles a man's struggles as he waits for his Guinness to settle. He whiles away the seconds by dancing around the glass until the pint is finally ready to be drunk.

The advertisement helped perpetuate the myth that two pours are required for the perfect pint of Guinness.

This commercial for an energy drink was so traumatic that it was banned before the 9 p.m. watershed, but it is one of the greatest bits of television advertising ever seen on the Emerald Isle.

Instantly recognizable, it features a group of zombies who break into a shopping mall and proceed to take part in a game of basketball.

While not technically an exclusively Irish commercial, this 2007 effort from Cadbury's is one of the best commercials ever made and warrants inclusion as a result.

2007 was a stellar year for TV advertisements and this one might just be the very best.

It makes no sense, but it is all the better for it. What better way to market a chocolate bar, after all, then by having a gorilla rocking out on the drums to "In the Air Tonight?"

For those who aren't in the know, Daniel O'Donnell is a country singer who has amassed a massive following in Ireland. Most of his fanbase are women of a certain age, like the woman in this commercial, and there would be no higher honor than for him to call on them for a cup of tea and a chat.

To then see the change in this particular woman's face when Daniel, who is not a registered gas installer, offers to take a look at her boiler is a moment of pure comedy.

What better way to cheer you up than by having two-time Eurovision winner Johnny Logan burst through the wall and sing the 1987 Eurovision-winning song "Hold Me Now?"

The answer is there is no better way.

This 2006 effort from McDonald's was the first in a series of commercials to use the famous Irish singer to promote their "Eurosaver menu" and it is easily the best.

The oldest and most enduring entry on the list, this Bord Na Mona classic is about as cozy as it gets.

It features a crackling fire accompanied by the Dubliners' Marino Waltz. So popular was this commercial that the Irish traditional tune has become synonymous with a merry fire.

To understand the context of this advertisement, you would have to imagine former president George W Bush appearing in somebody's cupboard to market a tabloid newspaper just two years after he had contributed to the biggest economic crash of a generation.

Because that is exactly what happened in this commercial.

Bertie Ahern, Ireland's former Taoiseach (Prime Minister), faced widespread public ridicule for this appearance while Ireland was in the midst of a financial crisis.

It made the advertisement even more successful, however, thanks to the publicity. It did little good for the News of the World though, who went out of business shortly afterward.

A plethora of Irish commercials deal with the theme of emigration and the joys of home, but none quite capture it like this tearjerking EBS advertisement from the late 1980s, when mass emigration was commonplace on the Emerald Isle.

The advertisement perfectly chronicles a young man's return to his home and is a really poignant effort.