On this day, Irish master of wit, Dave Allen was born on July 6, 1937! Some of our favorite comic bits from the joke-telling genius. 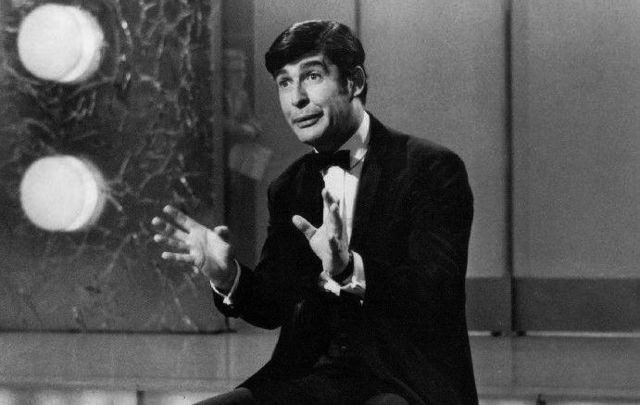 Dave Allen was known as a master storyteller with a razor-sharp wit. The Irish comic was renowned for his humorous anecdotes and jokes told while he was sitting on a tall stool with a whiskey glass in hand.

Born on July 6, 1937, Allen was originally from Tallaght, Dublin. The ex-journalist turned TV personality captured the world’s hearts in the 1960s and 70s.

He was known as one of the most controversial comedians in the United Kingdom as he frequently highlighted political hypocrisy and demonstrated his disregard for religious authority. His delivery was dry and sophisticated but was backed up with razor-sharp intelligence that cut through the absurdities of life and religion. Allen died in 2005 but remains one of the world’s favorite Irish stand-ups.

Here are some of Dave Allen’s best-known jokes and stories:

There’s an interesting thing between parents. Fathers and daughters and mothers and sons. The girl will bring the boy home for you to meet and because you’ve talked in liberal terms all your life you have to kind of follow this through.

And that’s it. He’s in. And they take over. She loved Paul. Paul’s an a**ehole. I come down in the morning he’s drinking tea out of my cup. Reading my paper. Eating my food. And not only that he’s humping my daughter. And I’m out in the garden feeding her rabbit! What should be happening: she should be feeding me and he should be out in the garden with the rabbit.

I suppose Ireland is the best place in the world for directions. People will say to you, “I wouldn’t start from here if I were you.”

I was driving to Wicklow town and outside Wicklow town, there’s a kind of country road and I came to a crossroad and there was one signpost and it had Wicklow on it and the other way was Wicklow. And there was a fella sitting there and I said does it make any difference? And he said, “Not to me it doesn’t.”

And I said why did you tell me about all the right-hand turns? Why didn’t you just say take the first on the left? And he said, “Who’s giving these directions, me or you?”

Toast at a wake "Here’s to your health"

A very important part of the Irish way of life is death. See if anybody else anywhere else in the world dies that’s the end of it. They’re dead. But in Ireland when somebody dies we lay them out and watch them for a couple of days.

It’s called a wake. And it’s great. It’s a party, a sendoff. The fella is laid out on the table and there are drinking and dancing and all the food you can eat and all of your friends come from all over the place and they all stand around the wake table looking at you with a glass in their hands looking at you and they say, “Here’s to your health.”

The terrible thing about dying over in Ireland is you miss your own wake. It’s the best day of your life. You’ve paid for everything and you can’t join in. Mind you, if you did you’d be drinking on your own.

The first question they ask, what do you know about God?

I’m four years of age, why wouldn’t I? Greatest Theological question in the world, three people in one… Where is he? “He is here!” Where? I can’t see him. “That doesn’t mean because you can’t see him he’s not here.” It doesn’t?

He’s a big bloke, why can’t I see him? And I’m asked, “Do you love him?” I don’t know, I’ve never seen him. “God loves you and he wants your love, but if you do not give him your love he will cast you into everlasting flame.” What? “He will cast you into everlasting flame, have you ever burnt yourself? Yes, I burnt myself on a candle. “What was it like?” It was sore. “Can you imagine that pain all over your body? That’s what will happen to you if you do not love God! What do you think of that?”

This is fact. This is not made up. Did you know that 90% of the dust in the world is made up of dead human skin? How do you feel about that?

You think you’re dusting your house? You’re not you’re just moving your grandmother around.

Shock causes greyness. Terror, fear, shock, actually it’s been recorded that a man went from being totally black haired to totally white-haired in something like seven minutes.

Now, what did he see that the others didn’t see? Can you imagine you’re one of those little hairs turning around to the other grey hair… “What did you see?” “I saw… I saw.. Ahhhh!” …Another one.

An old drunk is on his way into a bar when a nun standing outside the bar suddenly speaks to him. “Your drinking is the easy road to evil and damnation. Drink will pollute your body and soul. Give up the foul spirits and live a better life!”

The drunk looks at her and asks, “How do you know that drinking is so bad for you?”

The nun looks puzzled and shrugs. The drunk asks, “Have you ever even tried a drink?” The nun admits she hasn’t, so the drunk tells her, “Listen, I’ll go into the bar and order myself a drink and I’ll get one for you too. I’ll bring it out here and you can taste it yourself and see that alcohol is nothing bad.”

The nun reluctantly agrees, but says, “I don’t want anybody out here getting the wrong idea about me, so would you mind bringing me the drink in a paper cup?”. The drunk agrees to this and goes inside. At the bar, he tells the bartender “Give me a double shot of whiskey, and a second-half shot in a paper cup.”

The bartender groans and says: “Is that bloody nun out there again?”