Active octogenarian takes to the slopes with her grandson in County Cork becomes viral hit over night. 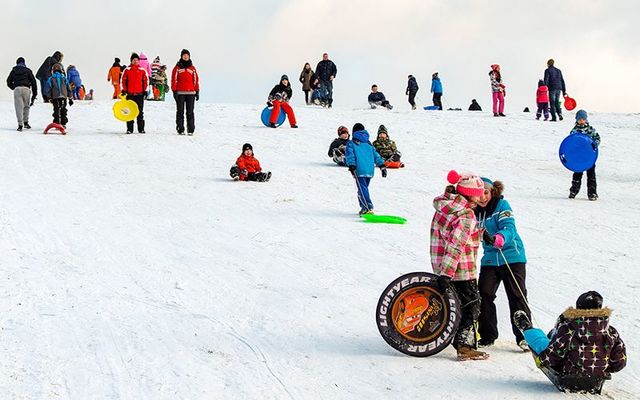 Active octogenarian takes to the slopes with her grandson in County Cork becomes viral hit over night.

The arrival of Storm Emma and the Beast from the East brought Ireland to a standstill for nearly four days but it didn’t stop some folks, like 86-year-old great-grandmother Eileen Maguire, getting out and having fun in the snow.

Maguire took to Sweeney’s Hill, in Rathpeacon, County Cork, with her grandson, Jack, and had a blast. The photo of the grinning great-granny soon went viral in Ireland and has been featured in the press from the United Kingdom to South America.

Read more: The Beast of the East has hit but Ireland is still cracking jokes

“I wouldn't have done it if it wasn't for my grandson Jack” the fun-loving great-grandmother told the BBC.

"I knew he'd be behind me and that I was safe.

"I watched them all having a great time and thought I'd give it a go - it was just spur of the moment.

"It was scary to start with but it got easier as we went along."

This is our favorite photo so far😅 86 years old Eileen Maguire and her grandson @jackmag95 in Sweeney’s Hill in Rathpeacon, Cork⛄️💚🇮🇪 Which one is your favorite photo so far? #cork_daily #photooftheday #snow #thebeastfromtheeast #stormemma #ireland . . 📸by @irishmadegifts 👏🏆 #thankyou . . ✨CORK ☘️💚🇮🇪 IRELAND✨ Please like, follow and hashtag our new İrish IG, Twitter and FB page. Any photos featured here also will be featured on our Facebook and Twitter accounts. To be featured, please follow us and use the hashtag #cork_daily on pictures of our amazing and beautiful country💚🇮🇪☘️ Thank you all in advance.. - @Cork_daily✨ . Please follow our second page @irish_daily 💚🇮🇪☘️

The photograph posted to Cork Daily’s social media quickly racked up over 7,000 shares and over a thousand comments, as well as being picked up by news outlets all over the world.

This wasn’t a once off from this active octogenarian who certainly keeps active.

"I play tennis a couple of days a week and I also go swimming - I just can't stay in,” Maguire said.

"I've got nine grandchildren and one great grandchild - and they all turn up".

Reacting to her new-found viral fame she said “I'm amazed at the reaction - I never thought it would go this far."

Her grandson Jack, who had her back on the sledge, said they weren’t surprised that Maguire had taken part in the fun.

"I knew from the start that she would get on the sledge. There was a load of people watching - it was just brilliant,” said Jack.

"She was screeching like a banshee going down the hill. It was so funny.

"Granny is very active, she just goes with it. It's cool that the photo has gone viral".

Maguire’s daughter-in-law, who took the photo, spoke about how proud they are of the great-granny.

"She swims in the sea during the summer months in Bantry, several times a day regardless of the weather - with her lipstick and everything.

"She won't be going to God's waiting room any time soon - she refuses point blank."

She’s also really touched at what a massive reaction the photo has had.

"I think it's amazing. The picture was a bit of fun.

"People are connecting from all over the country asking their grannies to give it a go too.

"People tend to think of the elderly as feeble and this shows they are not. It's amazing. They can give us so much more.

"Eileen is an inspiration to family and friends, and everyone around her."

Read more: Aran sweater adult onesie is the thing you need to get though winter