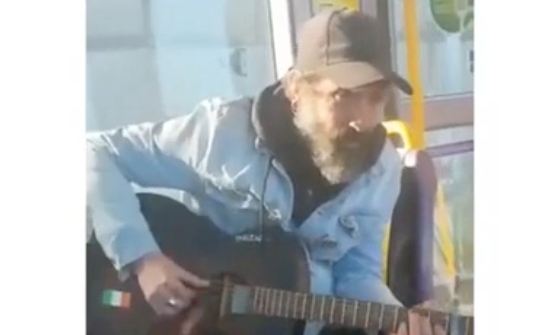 A Dublin busker entertained a child on public transport by performing the song "You've Got a Friend in Me." Reddit

The touching video of an Irish street performer singing “You’ve Got A Friend in Me” to an autistic child on public transportation warmed the hearts of Facebook and Reddit users.

The footage shows the musician playing the guitar and singing to a young boy sitting across from him on the Luas, the tram system in Dublin. As soon as the child hears the first few words of the well-known Randy Newman song from Pixar’s "Toy Story" movie, he squeals with delight.

The video was posted to Facebook by Peader Brown's pub in Dublin on March 2021, where it has received over 3.6K views.  According to the post, the busker’s name is Mick McLoughlin  and the young lad, who has non-verbal autism, is  Eddie Power from Cabra.

One of the commenters under the video said: "The joy in the face of that young lad, Fair play to him, wouldn't the world be a nicer place to be if there was more people like him."

Irish street performer sings 'You've Got a Friend In Me' to an autistic child on public transport. from r/nextfuckinglevel

The sweet scene was also posted to Reddit, where it moved many of the platform's users.

Another one said:  “…what a beautiful human being. Truly great to see videos like this during these trying times."

One person commented: "Yeah for real the kid's initial squeal of delight was such pure joy :)"

Mick McLoughlin, the musician in the video, has his own YouTube channel, where he's written that he's a busker musician from Dublin and has been playing on Henry Street for 10 years. His YouTube channel can be found here.