Discovering the perfect cure for an Irish hangover

We want to enjoy a good night out but we need to crack the Dublin recovery? A full Irish, hair of the dog? Nope, a dip in the Irish Sea is just magic. 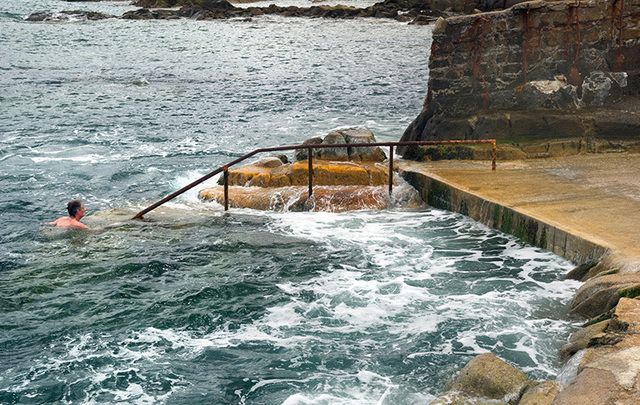 The Forty Foot, at Sandycove, in South Dublin. Tourism Ireland.

For any of you that have read my previous articles, you are probably aware that late nights and ‘fun times’ have been a big part of my time here in Dublin (and I make no apologies for them – I love every pint, conversation and good time I am having here with every Irish person I meet).

Hangovers though have been a little tougher to deal with than back home. (I’m telling you people, the beer is definitely stronger here, I don’t care what anyone says). Wanting to find out from Irish people what they do to get rid of the ‘drink demons’ the next day, I got some pretty interesting methods which I vowed I would try.

As told to me by a Galway guy when I asked him how he survived the next morning after a boozy session, his response was “Ah, there’s nothing like a good hearty Irish fry-up, love. Sure that’ll sort you right as rain”. Now, a fry-up with beans, sausages, and rashers are all fine to soak up that alcohol, but the black pudding, made from pig’s blood, on my plate was a little too much to stomach. I decided more research had to be carried out.

‘Hair of the dog that bit you’ was a phrase repeatedly told to me during my investigations and although I have to admit trying it, I have found it just prolongs the agony into another day of hangover hell.

My new favorite pub in Dublin, Grogan’s, was where I actually found the true remedy for this ‘Irish flu’. No, readers, not the actual pub, but there was a group of guys in there who had just been talking about doing a swim in the ’Forty Foot’.

Grogan's, an institution in Dublin.

The Forty Foot in Sandycove, County Dublin, is a wonderful inlet that used to be a nude male only bathing spot until those fearless feminists decided to dive in and bring it into the 21st century. I admit that I was about to chicken out by the time I got there as the temperature was 40 degrees Fahrenheit and there was a strong current in the sea, but I decided to suck it up when I saw a group of 50-year-old women strip down and plunge right in.

As I tip-toed my way into the icy cold water I seriously started to consider my sanity; but as I closed my eyes and told myself “Maggie, quit being such a wuss and just get on with it”, I just jumped right in. My body felt like it had pins and needles jabbing it as the pain of the freezing sea went right through my bones.
The only thing I had to do was tread quickly to get my body adjusted to this shocking experience.

Five minutes later, with the sun gloriously shining down over the crystal clear blue waters and my body beginning to finally warm up, I spotted a seal happily swimming around near some other swimmers; and at that moment, I realized I was in absolute heaven. With a wonderfully refreshing feeling all over me as I floated along the waves, I felt alive again and ready to take on the rest of my day.

To be honest, it was a bit of a shock seeing older naked men diving head first into the water (that still happens here) and the arctic water itself can feel like a cruel punishment at first, but it definitely took the cobwebs away and is probably my best discovery in Dublin so far.