Archaeologists working on a dig in Ireland made a small discovery that may prove to be massive: leprechaun bones 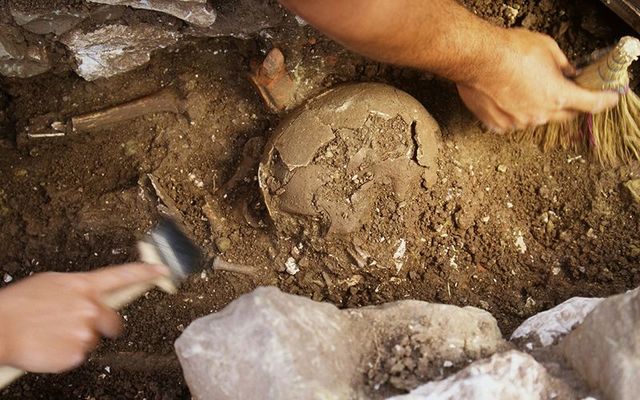 From the dig site

Archaeologists working on a dig in Ireland made a small discovery that may prove to be massive.

A team of archaeologists from the University of Beag at Oban in Scotland made a surprising discovery during a recent dig on the island of Hy-Breasal, off the west coast of Ireland.

The island, a mere 9 square miles (25 sqkm), has long been deserted and shrouded in mystery, and the team set out as part of a research initiative to establish whether it had ever been inhabited.

During an earlier exploratory visit to determine digging sites, they had found remnants of iron vessels, which dating revealed to be from the Iron Age, with unusual traces of ore sunken into their porous surfaces.

"The pots were sufficiently unusual that they generated more interest in the project and yielded us further funding," head archaeologist Dr. Henry Walton Jones, Jr. told IrishCentral via email.

While the first two dig sites, on the eastern and western shores of the island, yielded no further findings, the third, farther inland from the island's north shore, produced a perplexing discovery.

The bones of what at first was assumed to be a small child were unearthed - the only human remains found. 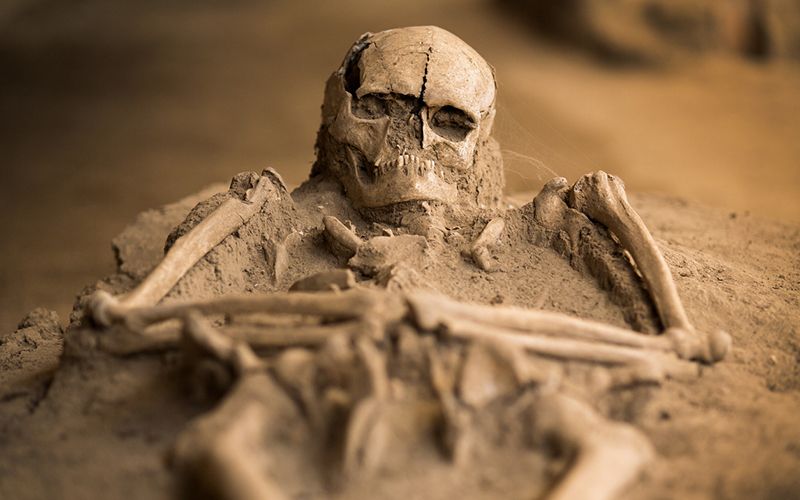 As Dr. Jones explained, through carbon dating and forensic analysis, the team was shocked to discover that the bones were those of a mature adult male, dating back 5,500 years to the Neolithic Era.

Through skeletal re-imaging, they were also able to rule out dwarfism or any other developmental defects that could have resulted in a stunted stature. Instead, they were looking at a fully grown and proportioned adult measuring just under three feet. Strangely, tests for age of death repeatedly came back flawed, with results of 3,582 years.

Other artifacts retrieved from the dig site included another of the iron pots, a piece of square metal similar in appearance to a belt or hat buckle, and 17 grams of golden ore.

"There was a variety of confounding inconsistencies concerning the findings, Dr. Jones said.

"To start, it's inconceivable that Neolithic-era man would have possessed such sophisticated materials. Secondly, in my 36 years in the field, I have never encountered remains of such a small mature adult from this era."

It was junior forensic archaeologist Brendan Óg who first suggested it may be a Leprechaun.

Initially, everyone laughed it off, Dr. Jones said, but after continuing to hit obstacles in piecing the story together, they began taking the possibility more seriously.

"There is a wealth of myth and lore surrounding leprechauns, and it's not entirely impossible that a sub-species of very small people with a penchant for gold existed at one point in time," Dr. Jones said.

They are tentatively classing it as "Homo leprechaunus."

Many questions remain, he added. "How did he get to Hy-Breasal? Were there any others like him? How did he come in possession of such advanced materials at such an early stage? Why was he so small?"

Looking back over field notes, Óg was struck by his description of how the team landed upon the third dig site. The day had been a wash due to an early rain storm, but the rain stopped with just two hours of daylight left. They were all amazed to see a magnificent rainbow pointing straight into a clearing and went to investigate.

"You can't make this stuff up," Dr. Jones said.

Extensive additional digs and research will take place on the island throughout 2018, starting again today, April 1.

"Though he was small in stature, his significance is huge," said Dr. Jones.