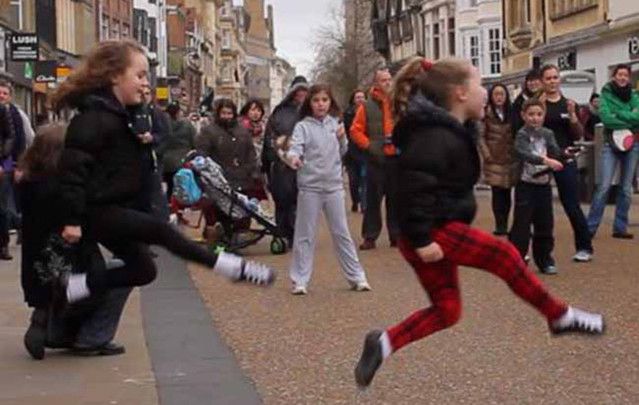 The Fusion Fighters dance and music team is now famous in Britain after their spectacular flash mob appearances in Trafalgar Square, and some of the organizers also took part in the famous Sydney Irish flashmob train station event.

In March 2014, in collaboration with Irish dance teacher Liz McCarthy, they took over the town of Oxford for a wild gallop through different dance styles including Irish.

An unsuspecting passer-by pressed the mysterious red button and the performance began.

The group, who launched their initiative on St Patrick’s Day 2013 in Trafalgar Square, enjoy using various art forms and technologies to create their performances.

This isn’t the first attempt at a flash mob by creative director Chris Naish of Riverdance fame. He and his public dance crew Sneaky Steppers co-organised the viral hit St Patrick’s Day Flash Mob in 2011 at Sydney Central Station, Australia which received millions of hits on YouTube.”