There are as many ways to ruin an Irish Christmas because the only thing you'll ever get two Irish people to agree on is a hearty disagreement. 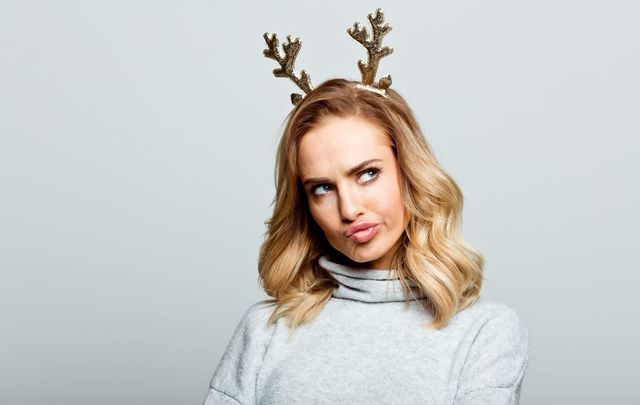 There are as many ways to ruin an Irish Christmas because the only thing you'll ever get two Irish person to agree on is a hearty disagreement. Getty

There are as many ways to ruin an Irish Christmas as there are Irish people. That's because the only thing you'll ever get two Irish people to agree on is a hearty disagreement. But if you're not a native of Ireland then IrishCentral would like to alert you to at least nine things that could easily put the no in your Noel, the yuck in your Yuletide, the cripes in your Christmas. Beware.

Invite your friends to sing a party piece

This history of Ireland, despite our best efforts, is godawful. So how do you unpack 800 years of brutal colonial exploitation, oppression, and murder in a four-minute song and not get your listeners to dander up?

Perfectly lovely Irish evenings have often run aground after a competently sung "Rising Of The Moon." Be careful whose lonely passion you're igniting. Later on, you could find your wife musing sadly about a long-lost love as the snow falls faintly and faintly falls on the road home.

Buy the PlayStation 4 instead of 5

Listen, your dad doesn't know a PlayStation from a Space Station. Unfortunately, international patriarchy has determined that he's usually the one with the ready cash to purchase it. And if he follows Irish tradition he'll almost certainly have had a few jars before he even reaches the toy shop, raising the likelihood of a fatal error tenfold.

This method of ruining Christmas is utterly fail-safe, in the tradition of It’s The Wrong Train Set, but this is a B-List Barbie, and the classic You Got Me The Little Mermaid When I Wanted Elsa from "Frozen." There’ll be tears on Christmas morning and sulks for days.

Dancing With The Wrong Man Or Woman

Oh, tread carefully. This one unfolds when your older brother brings a nice American wan home from his new life in Miami. She or he is pretty, tanned and smells like fabric softener and bubblegum. You don’t tell anyone, but she or he has completely turned your head and after a Guinness or two your natural caution is diminishing as your ardor swells.

This is a time-honored Christmas horror. Whilst you take her or his hand and lead them to the dance floor the entire town will have taken note of your terrible transgression. More to the point, so will your fuming sister or brother. There are a million ways for this to go wrong and only a few where they can go right. It’s too bad that you didn’t meet him or her first, but those are the breaks and you’d be better off rolling with them than being rolled by an angry sibling.

Making the remark in an Irish home can lead to spectacular results that are not commensurate with the original offense. In a country where people are literally hardwired to seek consensus, a stinging phrase is an impermissible impertinence.

Comments can range from the deceptively innocent “I see you boiled the Brussels sprouts” to the intentionally wounding, “Is there sherry in this Sherry Trifle?” Pass a remark like that and watch a storm force gale gather around you, deservedly too, I might add.

Each year the Queen of England gives a speech that, thanks to our geographical proximity, is quite easy to pick up in Ireland too. At three in the afternoon, some Irish households have left the TV on all day and some have inadvertently watched it, which, if overheard by the neighbors, can have interesting social consequences. This won’t quite ruin Christmas, but it will raise eyebrows.

Nobody likes fruitcake. Nobody.

That’s why there is only one fruitcake in existence and it's gifted and re-gifted to every family in Ireland in a tradition that reaches back to the age of the Firbolgs. Don’t gift fruitcake and if you receive one pass it on the first chance you get. Don’t break the chain.

Your auntie Mary has cataracts, but she’s devoted to knitting. It’s manual therapy for her anxious hands. Each Christmas she presents you with a special new hand-knit jumper (the Irish word for a sweater) that makes you look like you’re auditioning for Dr. Seuss, the musical.

It would, of course, be a terrible thing to avoid wearing this itchy horror to midnight mass where she can proudly claim it’s all her own work before the entire community. Auntie Mary knows Christmas is a time for horrible jumpers and public humiliation and Auntie Mary ruins Christmas.

No one likes this embarrassing tradition, no one, especially not the Irish who are notoriously touch-averse if they haven’t sent you the unmistakable come hither signal. Irish people live in horror of being grasped by the uninvited and you’ll rarely see the cold shoulder served colder if you try this nonsense on.

Having The Unity Conference

A nation once again? Keep your four green fields to yourself for the week that’s in it between Christmas and New Year. There’s nothing wrong with the political aspiration, but this is a time for deep relaxation and peace.