1990s gems that will make you super nostalgic

The news that Play-Doh maker, Hasbro, has trademarked the modeling clay's scent has sent us on a huge 90s nostalgia buzz. The TV shows, the toys, and the dodgy fashion that we’re actually quite into now. What a time to be alive... 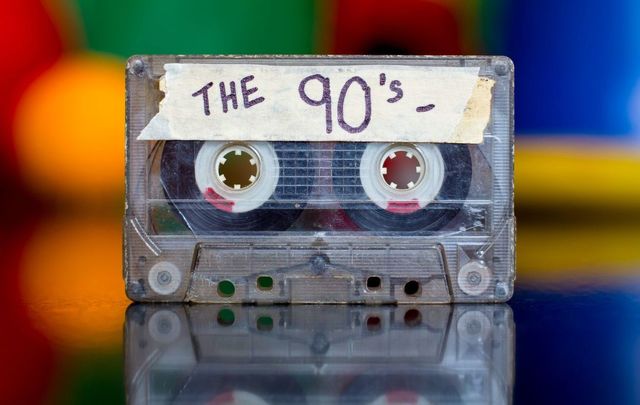 The news that Play-Doh maker, Hasbro, has trademarked the modeling clay's scent has sent us on a huge 90s nostalgia buzz. The TV shows, the toys, and the dodgy fashion that we’re actually quite into now. What a time to be alive...

There are some things that, even decades later, bring you right back to when you were a kid. Just the words Play-Doh can make us smell that unmistakable scent of those yellow tubs - even if we had to make do with a knockoff version, mála (or was it called marla in your school!?) in primary school.

Earlier this week Hasbro announced it has trademarked that famous Play-Doh smell (although the brand actually had created it in a perfume form to celebrate its 50th anniversary). It’s described as a “sweet, slightly musky, vanilla fragrance, with slight overtones of cherry, combined with the smell of a salted, wheat-based dough”.

Well, eh, take their word for that – but one thing is for sure, just thinking about it gave us BIG nostalgia feels. Here are some of our other faves from younger days – what are yours?

In hindsight, it seems we had a lot of Australian TV shows on Irish telly back in the day (Home & Away and Neighbours being the obvious biggies). Round the Twist was a particularly odd one but was essential viewing. It centered on a family that lived in a lighthouse and had many strange, magical adventures.

We were convinced this high tech gem was going to have us well on our way to a stellar career as a designer (fashion weeks! Magazine covers!). That may not have worked out but we did love the simply sketchy magic – even if our mums gave out to us for all the paper we wasted. Tsk, how shortsighted.

It was low-tech, yes, but the stakes were high in the underground fancy paper, rubbers, and stickers swapping markets. All around the country, Irish girls  – and some boys, we’re sure – lost their tiny minds over pretty notepaper and matching envelopes and stickers that sparkled or, best yet – smelled all fancy! Friendships were made and lost. We’re not even joking.

Soooo, this one didn't really, eh, date all that well but they were different times! Dream Phone was a board game – complete with phone – in which players tried to figure out which of the various available ‘hotties’ fancied them.  (Is it just us or is there a slightly sketchy age difference between the guys and the girls in the ad too?!)

We bloody loved this show! It was full of creative inspiration and ideas for arty projects with all that hyper-bright, hyper-energetic feel of all good kids' shows. Although we mostly sat in a semi-comatose slump on the couch, snacking and watching it in our school uniforms, thinking, ‘That’s great, I should make that’.

Another Aussie import, this one had the U team all shouting in recognition. We probably fancied the cheeky rapscallion that was young Peter Unwin George Wall (Pugwall, geddit?) a bit. Or maybe it was just the Aussie sunshine or the fact that Pugwall and his mates had a band, that had us falling for it.


No Irish 90s kid roundup could be without this little guy. Was Bosco a girl, a boy? Who knew? All we cared about was that this was compulsive viewing – even when we were really too old for it. There was a lot of singing, much dodgy dancing and more than but there wasn’t an Irish child that didn’t want to go through that magic door at least once in their lives.

Read more: The most popular toys for Irish kids in the 1990s