Brock Montgomery, 29, a well-known former Canadian ice-hockey player, and his Dutch partner Claire de Haas, 27, arrived on the island last week to take up the role of caretakers for 2022. 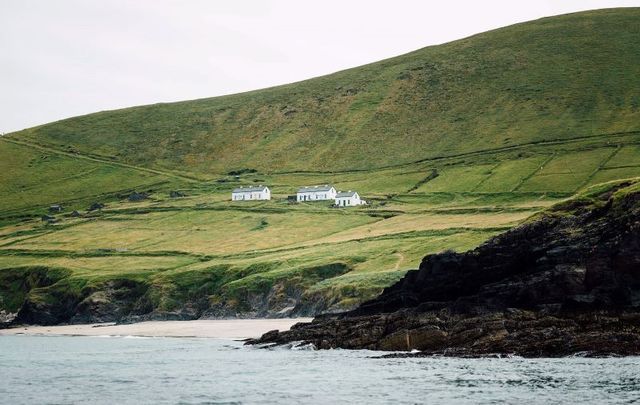 If at first, you don't succeed... This couple finally landed their dream job as caretakers of Great Blasket Island after unsuccessfully applying for the role on three previous occasions.

Brock Montgomery, 29, a well-known former Canadian ice-hockey player, and his Dutch partner Claire de Haas, 27, arrived on the island last week to take up the role of caretakers.

The job has become one of the most sought-after positions in the world in recent years, with more than 100,000 people applying for this year's job.

De Haas described the job as a "unique opportunity" to learn about a new culture and surroundings.

"We know it’s going to be hard work, but we like the challenge," she told the Irish Times.

Located off the coast of Kerry, Great Blasket Island has been uninhabited since the 1950s and possesses no running water or electricity.

However, Billy Hayes and his partner Alice Hayes, who operate three cottages and a coffee shop on the island, are inundated with applications from all over the world for the role of caretaker on the island every year.

Hayes told the Kerryman that Montgomery and de Haas remained in touch after their unsuccessful application over the last few years.

"They actually applied, I think it was two years ago now and they’ve kept in touch with us over the past few years, letting us know that they were still really keen and really interested in the position. Even throughout the seasons just gone, they’d always pop us a message letting us know they were up for it," Hayes said.

Montgomery and de Haas said their time on the island has been "spectacular so far".

"We got pretty lucky the first two or three days we were out here, it was just gorgeous. It was beautiful and sunny and so we had a really great first impression, it was stunning. We were able to walk around and go see the seals and a lot of the island," Montgomery told the Kerryman.

"The last week, it’s been rainy and cold which isn’t so bad because we’ve been cleaning and working the last few days getting the cottages ready but now that’s done, we’re looking forward to more sun and nice weather."

The couple has brought an eight-month-old husky puppy named Lenny with them to keep them company during their time on the island. The couple said they decided to foster Lenny to help out the animal rescue charity Sera Husky & Animal Rescue.

"We want to try and raise a little bit of awareness for a local dog shelter because just with COVID, everyone had gotten so many dogs, and then when lockdown ended, they realized they didn’t want them and so all these dogs flooded back so Sera Husky is really busy so we’re actually fostering one of their dogs out here with us," Montgomery said.