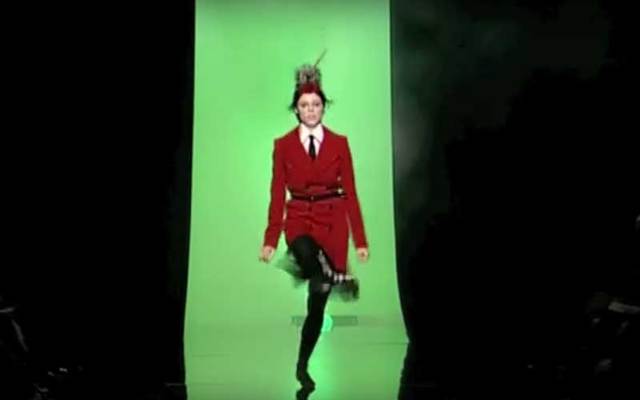 Model Coco Rocha in a snapshot of her dancing down the runway at Jean Paul Gaultier’s 2007 show. Coco Rocha/YouTube

In a Facebook video, Rocha, who was discovered by a modeling agent at an Irish dancing contest when she was 14, recalled the first time she danced for Gaultier. “Not a week goes by that I’m not reminded by someone I work with of the time I Irish danced down Jean Paul Gaultier’s runway in 2007.”

Not a week goes by that I’m not reminded by someone I work with of the time I Irish danced down Jean Paul Gaultier’s runway in 2007. To be honest, the fact people still remember it all these years later is amazing to me, especially because there was literally only ONE smart phone in the audience that year that captured the show and posted it to YouTube 13 years ago. When I did my fitting for the show JPG had already decided on a Scottish themed soundtrack and that's when he found out I was randomly trained in Irish dance before modeling. Scottish and Irish dance are very different but it was his idea to combine the two and have me open the show doing something really special. He left it up to me to come up with the choreography, which made me more than a little nervous. I’d walked in quite a few fashion shows before, but this was the first time I'd done any kind of special “performance”. Would people like it or think it was bizarre? Would I, blinded by lights, leap right over the edge of the catwalk into Anna Wintour’s lap on the front row? I had no idea. The dance was a big success, I didn’t fall off the runway, and Vogue magazine later named it the “Coco Moment”. I think people were just so surprised to see me do such an obscure dance down such a very very long runway. I didn't expect people would remember it past that season but they have, and still do, even now years later. After this show Jean Paul continued to bring me all sorts of fantastic ideas for his runway - one year it was a mud fight, another I was a mermaid with a real fish tale. Once I was on a giant 20 foot swing and another time I was literally in a wheel barrow. There was never a shortage of fun ideas with JPG and I was always up for every one of them all.

Thirteen years later, Gaultier asked her to perform the dance again at his couture presentation this month, in honor of his 50 years in fashion. However, Rocha didn’t know it would be his last show before his retirement until five days ahead of the event.

Dusting off a few old moves ready for tonight... 🖤

On Wednesday before the event, Rocha posted a video of herself practicing her Irish dance moves in anticipation of the show.

One final dance for my friend and mentor Jean Paul Gaultier. Words fail me as I try to describe what his support has meant to me for more than half my life. Thank you, thank you, thank you Jean Paul. 🖤 @jpgaultierofficial 💚@missymisdemeanorelliott

Rocha also posted a clip of her dancing in the final show on Instagram, writing: "One final dance for my friend and mentor Jean Paul Gaultier. Words fail me as I try to describe what his support has meant to me for more than half my life. Thank you, thank you, thank you Jean Paul."