An Irish American firefighter in Boston is spreading holiday cheer in an unusual and hilarious way. 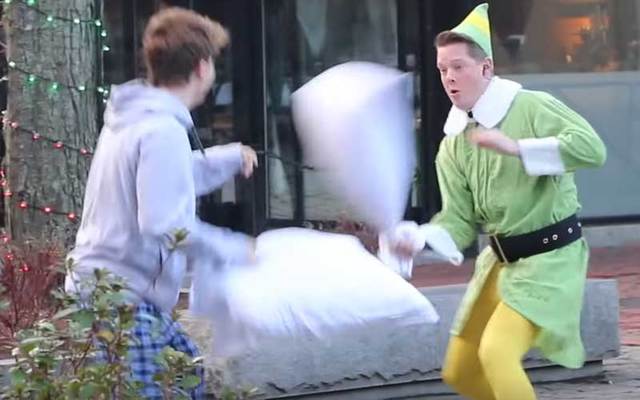 An Irish American firefighter in Boston is spreading holiday cheer in an unusual and hilarious way.

Brendan Sullivan, who likes to make short comedy videos, is bringing smiles and laughter to holiday shoppers at Faneuil Hall by dressing up as Buddy the Elf from the Will Ferrell film "Elf" and challenging strangers to a pillow fight.

Sullivan, who likes to make short comedy videos, has captured all the fun and posted it online.

“I said why don’t we do pillow fights with strangers featuring Buddy the Elf,” he told 7News. “And that’s what we rolled with.”

Sullivan was open to battling with everyone, but he says his favorite pillow fight was with an older woman.

“I had her hit me with the pillow and I fell to the ground,” he recalled with a smile.

“When she helped me up I came in with the sneak attack.”

Sullivan said his inspiration came from one of his favorite movies.

“I love Will Ferrell anything,” he said. “For Will Ferrell to come out with Buddy the Elf, it’s just like an iconic character now for Christmas.”

Sullivan plans to be out in Boston as Buddy the Elf once a week until Christmas.

“That’s what we’re out there for.”

What's your favorite Christmas movie? Let us know in the comments section, below.