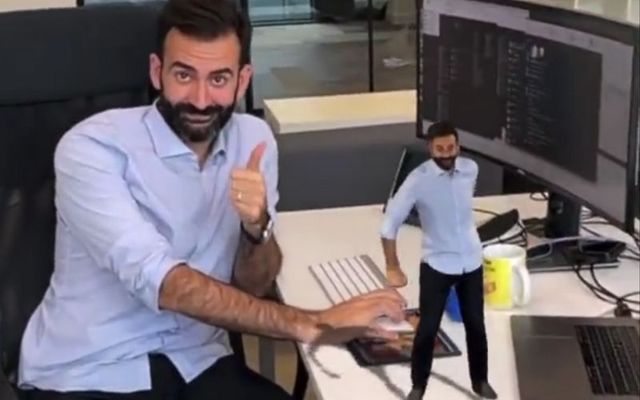 An Irish startup has launched an app that allows people to record 3D videos on a standard iPhone, becoming the first content creation app capable of converting standard mobile video into augmented reality.

A 3D image of a real person is usually created by surrounding the subject with dozens of cameras and recording a 360-degree video in a time-consuming and costly process known as volumetric capture.

Irish startup Volograms, however, has brought the process to mobile phones, allowing users to record 3D videos even though phone cameras capture video from just one angle.

The company's free app Volu was launched on the App Store in September and uses artificial intelligence to 3D shape and texture of a person that a phone camera does not see.

The app uses algorithms that have been trained on thousands of human models in Volograms' professional studios and converts moving images to holograms - or "volograms" - that users can play around with in creative ways.

Volu allows users to shrink or enlarge volograms and superimpose them onto any backdrop, while it also allows them to add filters to images.

"We wanted to create something that would enable anyone, not just the professionals, to create content, play with it, share it," Pagés told CNN Business.

The company said on Twitter that it hopes to empower a "new generation" of content creators and transform the way that people communicate.

Volograms has raised €2.3 million ($2.7 million) in funding since the company was founded in 2018 and is one of the few companies making volumetric capture available to consumers.

Although the Volu app is free, the company plans to introduce "pro features" to raise more income.

Volograms is meeting a growing demand for easy-to-use VR and AR technologies, according to a recent study by market research firm eMarketer.

The company estimates that 60 million Americans will use VR at least once a month this year, while roughly 90 million people in the US will use AR.

Demand for AR and VR has risen during the COVID-19 pandemic, with people exploring ways to use the technology to replicate in-person meetings in a virtual setting.

Facebook, for example, has launched a VR app that allows users to customize avatars and sit in a virtual conference room with their colleagues.

The social media giant announced this week that it intends to hire 10,000 people to help build its "metaverse".

UK-based company Dimension has also partnered with Microsoft to create 3D videos that will cater to a large number of events, from fashion shows to sporting occasions.

Volograms, however, remains one of the few companies that brings AR and VR to the everyday consumer.

The company has already launched Volu on the App Store and is set to make the free app available to Android users in the coming weeks.