Corkman will soon enough have us all driving under the influence of his new ground-breaking whiskey-derived fuel. 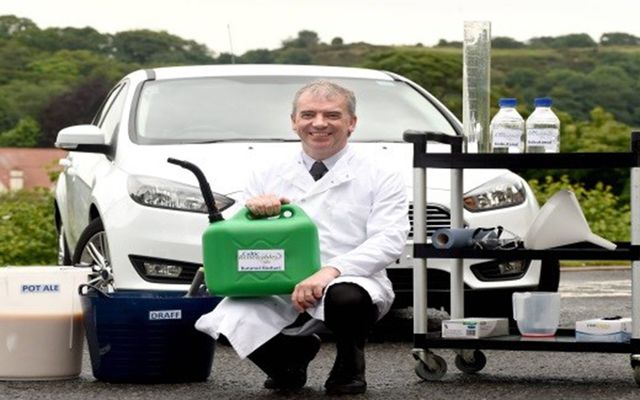 Driving on whiskey is not something we ever thought we’d recommend, until last week when an Irish scientist living in Scotland made an amazing breakthrough with a whiskey-based fuel source.

Martin Tangney from Co. Cork will soon enough have us all driving under the influence of his new ground-breaking whiskey-derived fuel that successfully powered a Ford Focus through a test drive on July 7.

Biobutanol, the name given to the whiskey residue biofuel, has been years in the making and it is hoped that it can be a replacement for gasoline in the future and require no modifications to today's car engines for it to work.

Not only that, but we could soon have whiskey-fueled flights and not the kind where you have a shot or two to calm your nerves. The new fuel is expected to be adaptable to other types of engines and could be a replacement for not just gasoline and diesel but for jet fuel as well.

If further funding can be found, Tangney’s whiskey-derived fuel could be absolutely revolutionary.

“This is the first time in history that a car has ever been driven with a biofuel produced from whiskey production residues,” said Professor Tangney, president of Edinburgh Napier University’s Biofuel Research Centre and founder of Edinburgh-based Celtic Renewables Ltd, the company that owns the new fuel type.

“It is fitting to do this historic drive in a Ford, as the original Model T cars developed by Henry Ford ran on biofuel.

“This drive demonstrates that we can make truly sustainable biofuel through what we believe can become a multi-billion pound global business with the opportunity to turn transport green.”

Read more: Vintage Irish whiskey vending machine is the thing that’s been missing from your nightlife

The fuel itself is created using draff, the sugar-rich kernels of barley which are soaked in water to facilitate the fermentation process in whiskey production, and pot ale, the copper-containing yeasty liquid left over following distillation.

The process used for the biofuel was originally used at the start of the 20th century, especially during World War One, to produce acetone used for explosives. The method was phased out in the 1960s, however, because of competition from the petrochemical industry, but it has been revived and remastered by Tangney, in collaboration with Tullibardine Distillery.

While Tangney and Celtic Renewables Ltd received $11.6 million (£9 million) in funding from the Scottish government to build a commercial demonstrator plant, the Irish scientist is now looking to match the money through private equity.

Almost 750,000 tons of draff and two billion liters of pot ale, the two composites needed for the fuel, are created in Scotland alone by the malt whiskey industry each year. Tangney states that the industry has no further use for them once the whiskey is made and so his new discovery is sure to save on waste.

Would you drive a car fuelled by whiskey? Let us know in the comments section, below.