Tourism Ireland has launched their 2023 marketing plans which include an emphasis on sustainability and a global campaign that will feature a few famous Irish faces. 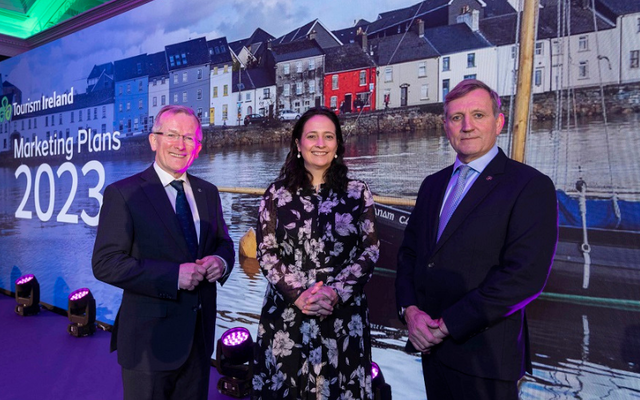 Tourism Ireland has launched their marketing plans for this year's overseas tourism to the island of Ireland.

The event, which was held in Dublin and Belfast this week, was attended by Tourism Minister Catherine Martin and around 500 tourism industry leaders from around the country.

Tourism Ireland outlined their strategy to rebuild overseas tourism to the island of Ireland with a €78 million marketing budget being laid out for 2023.

Sustainability will be at the heart of the work we do over the coming years. As well as focusing on the economic sustainability of the tourism industry. #TI2023 pic.twitter.com/3mIeHAwYmL

The hope is to attract ‘value-adding tourists’, visitors who stay longer, spend more in the regions and in Northern Ireland, arrive during the shoulder season, and consider their impact on the environment.

Sustainability will be at the heart of Tourism Ireland’s work over the coming years. As well as focusing on the economic sustainability of the tourism industry, the strategy also has social sustainability (the benefit that communities across the island experience from overseas tourism) and environmental sustainability at its core.

Tourism Ireland’s new global campaign – "Fill your heart with Ireland" – was also unveiled at the launch. The new ads feature actresses Sharon Horgan, from "Bad Sisters", and Saoirse-Monica Jackson and Jamie-Lee O'Donnell, from "Derry Girls". The campaign is about dialing up what differentiates the island of Ireland from other destinations – communicated through various celebrities, who share what fills their hearts with Ireland.

The new campaign will go live from St Patrick’s Day in the top four Irish tourism markets – Great Britain, the United States, Germany and France – and will then be rolled out in nine other important tourism markets around the world.

Speaking at the launch, Tourism Minister Catherine Martin said: “I want to commend Tourism Ireland for the comprehensive marketing strategy they have put in place for 2023.

"In particular, I welcome the focus on embedding sustainability across all its activities, the increased consideration of the environmental impacts of tourism, and the focus on increasing representation of holidaymaker diversity."

In 2022, Tourism Ireland’s focus was to "restart" overseas tourism to the island of Ireland. As the year unfolded, international travel rebounded more quickly than anticipated, with 2022 finishing at around 75% of 2019 business.

Factors like pent-up demand for travel, deferred bookings, and accumulated savings led to a surge in travel to Ireland. Air and sea capacity also returned at a faster rate than expected. The priority for this year will be to "rebuild" tourism to the island of Ireland.