They're one of Ireland's biggest tourist attractions, but there's more to the Cliffs of Moher than just natural beauty. 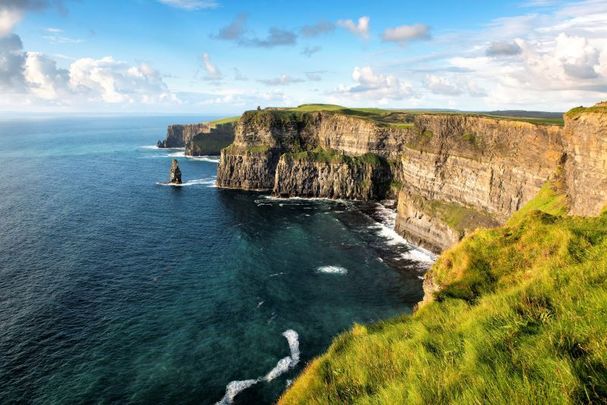 Do you know why they're red? Or when they were formed? Here are five things you didn't know about the Cliffs of Moher.

Located in County Clare, the Cliffs of Moher are one of the most instantly recognizable Irish attractions, and while there's no doubt that they're incredibly beautiful, they're also steeped in local myths.

The Cliffs of Moher are cursed

One local tale states that the lost town of Kilstiffen is hidden underwater near the cliffs. Years ago the town's chieftain lost a golden key that opened the castle; the town sank and will remain underwater until the key is found again.

Some say they've seen the town under the water on calm days, while one legend states that the town rises every seven years and anyone who sees it above water will die before the next rising. 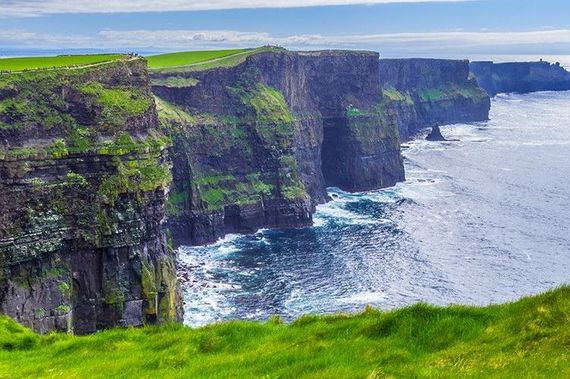 As for the golden key, stories differ as to where it is. With some believing it's buried under headstones on Slieve Callan while others think the key is hidden in a nearby mountain lake.

Whatever you believe, we say look away if you see anything resembling a rooftop during your visit!

The Cliffs of Moher are a refuge for fauna

Yes the cliffs themselves are beautiful, but did you know that since 1998 they've been a designated refuge for fauna? It's a breeding site for over 30,000 species of seabirds and during the spring months, Atlantic Puffins arrives in their thousands for nesting season. Making March through May an ideal time for bird watchers to visit.

The Cliffs of Moher appeared in The Princess Bride

Yup, the legendary movie boasts a cameo appearance from the Cliffs of Moher. In the film, they were renamed The Cliffs of Insanity.

Read more: Where are the best bird watching sites in Ireland?

The Cliffs of Moher are drenched in blood

Well, so says a local legend! When you look at the most southerly point of the cliffs, they look like a woman looking out to sea, which is why they're called Hags Head. So, who is this old hag? 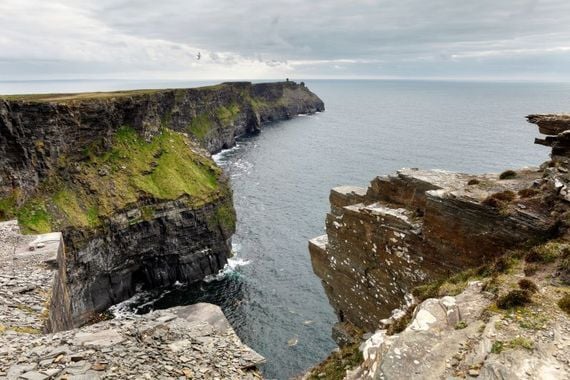 Hag's Head at the Cliffs of Moher.

According to lore, her name was Mal and she was in love with Cú Chulainn. Unfortunately Cú Chulainn didn't return her advances, and instead ran the length of Ireland to avoid her. He eventually ended up at Loop Head in Co Clare, and Mal thought she finally had him cornered. However, Cú Chulainn was one step ahead of her and jumped back to the Cliffs of Moher, using the sea stacks as stepping stones.

Mal tried to follow but, not being quite as nimble, fell to her death. Her blood turned the sea red and soaked the cliffs themselves. Which is why they appear red occasionally. The nearby town of Miltown Malbay was named after her, so while she didn't get her man she did get a place in history.

The Cliffs of Moher are over 300 million years old

Yup, they were formed 320 million years ago during the Upper Carboniferous period. You’ll experience this as visible bands of Namurian sandstone, siltstone and shale. 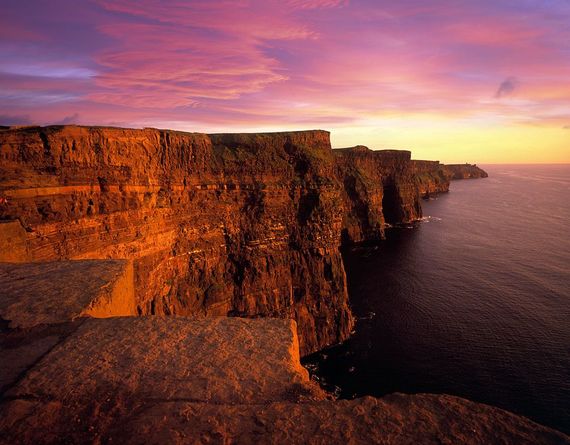 The Cliffs of Moher at sunset.

Where the cliffs stand now was once the mouth of a might river which ran into the sea. Heavy rainfall washed sand and mud into the river, which was deposited at its mouth. This debris compacted over time and eventually formed the now legendary cliffs.