No UFOs of otherworldly acts, rather the amazing skill of forester Liam Emmery and his surreal and incredible legacy. 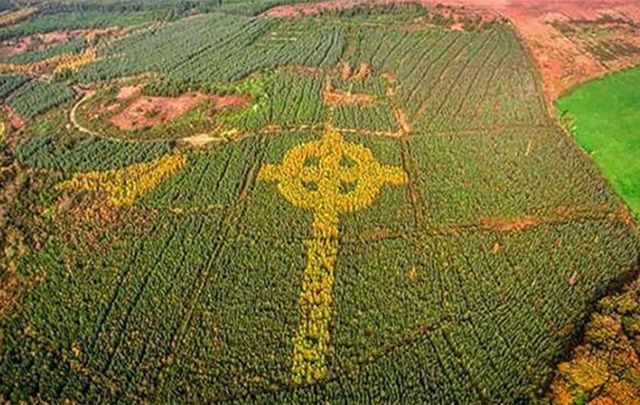 Like the crop circles spotted in farmers’ fields, the massive Celtic cross shape spotted by passengers flying over Donegal set the internet abuzz – from the US to Australia the image went viral, back in 2016.

While this amazing creation has some amazing origins it certainly wasn’t UFOs or an otherworldly act, as you might think.

The cross is now known as the Emmery Celtic Cross, named after its creator. Forester Liam Emmery (51), planted this amazing Celtic cross design nearly 11 years ago in the woods near Killea, in Donegal. Emmery used two different types of trees create the effect, which must have taken amazing planning skills.

Sadly, Emmery died in 2010 after suffering brain damage and it was only in the fall of 2016 that his amazing creation in Killea became visible. It was first spotted by passengers flying into the City of Derry airport. The cross measures more than 100 meters in length and 70 meters wide.

Emmery’s wife, Norma, told Ulster Television, that she knew little about her husband’s work but said that his Celtic Cross would make him proud. She said “Liam was in an accident and he was unwell for two years and he had suffered brain damage.

“If he was here, we would all have heard about it because he would be so proud.”

She added "He would have been so proud. He loved things to be perfect and I think the Celtic Cross is perfect for him."

Horticultural expert Gareth Austin told UTV that this vision of the cross in the forest could be visible for the next 60 or 70 years. He also commented on the massive amount of skill involved in creating such a piece of art.

Austin said “It’s not just cutting patterns in your back lawn, this is sizeable horticultural engineering.

“Liam created that and gave the gift of that to the rest of us, and we’re going to appreciate that for the next 60 or 70 years.”

What an amazing legacy to leave behind for generations of Irish and visitors to enjoy.