Why Ireland is the other home of golf

As the US Open kicks off at the Erin Hills golf course in Wisconsin, we’re also thinking about the courses of Ireland and all the amazing golf you can play there. 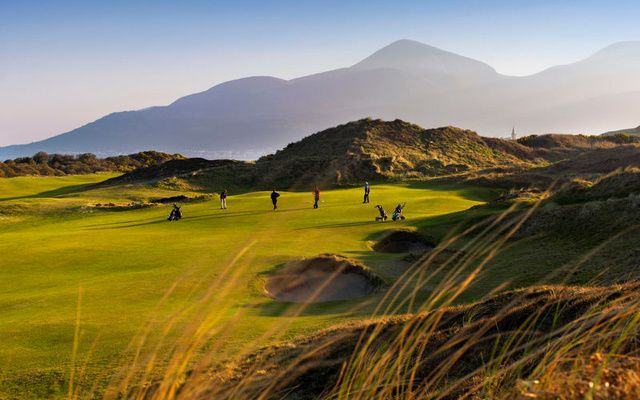 Royal County Down golf course - just one of the many stunning courses on the island of Ireland. Tourism Ireland

He was in the airline business. He was American. And he knew his golf.

You know, he said, the American golfer who makes a first foray across the Atlantic typically goes to Scotland first.

Then the golfer goes to Ireland.

Then returns to Ireland.

This, of course, begged the question: why?

I’ll attempt to answer, but first an admission.

I am biased because I am from Ireland and much of my youth was spent of golf courses there, one in particular, where my dad and other family members enjoyed membership.

That said, I am also objective enough to know that in writing about Ireland as one of the planet’s prime golf destinations I am on very firm ground indeed, anything but a voice in the wilderness, or the rough.

And here’s another thing. I have played the game all over the United States and that includes Hawaii.

I have walked the walk at the likes of Augusta National and Pinehurst. I have cast an admiring eye over Pebble Beach.

And yet I still close my eyes and imagine a fair Irish day on a green Irish fairway.

I also imagine better shots than I’m capable of hitting, but that’s another story.

At the end of this homage to Irish golf - being penned just days before the U.S. Open in a place called Erin Hills (Wisconsin) no less - I will repeat what has been said to me by more than one American golfer, this with regard to where arguably the most spectacular golf course on planet earth can be found.

And, yes, this is a subjective point of view. It’s really impossible to rate a course as being “best” in the world. But “spectacular” leaves a little more wiggle room.

And, as stated, the affirming with regard to this particular course opinion has been directed at yours truly more than once.

So where there’s smoke…..

I have not played this course, but have played a fair few other Irish courses that certainly rate in global terms.

So let’s take a little trip around the island and name a few.

First up though, it’s important to note that golf, along with a number of other sports, is an all island affair in terms of governance.

There is no border in Irish golf.

This fact led to all the ballyhoo a while back regarding Rory McIlroy and whether he would represent Ireland or Great Britain in the Olympics.

He didn’t play in the games, but had he done so it would have been for Ireland.

Rory is a pivotal figure in Irish golf in more ways than one.

His foundation is a prime sponsor of the Irish Open, this year being played in Portstewart, County Derry in early July.

McIlroy’s success in golf majors, along with that of Graeme McDowell and Darren Clarke, both from Northern Ireland, has been instrumental in the decision to bring The Open to Royal Portrush, just down the road from Portstewart, in 2019.

Padraig Harrington’s name being twice inscribed on the Claret Jug is also a factor.

This return of The Open to the Antrim coast draws a link back to 1951 when the oldest of golf’s majors was played there and won by Max Faulkner, a player remembered for his preference for plus fours instead of golfing slacks.

Faulkner was a standout in more ways than just dress.

The story has it that after three rounds through the rolling Portrush dunes, Faulkner was signing autographs that already proclaimed himself as the winner of the tournament.

True, he was six shots up after 54 holes but stranger things have happened. In this case they didn’t.

I met Max Faulkner when I was a kid.

He was playing at that course where I spent so much of my youth, Woodbrook, which straddles the line between Dublin and Wicklow.

I remember those odd looking plus fours. Faulkner was also a nice guy, or at least a tolerant one as he was being buzzed by whippersnappers like myself eager for player monikers.

And in Ulster there’s another brace to add to the list of must-plays. Royal County Down for sure, and I have fond memories of a nice stroll around Rosapenna links in County Donegal, a place where you could tee off on the eighteenth at 10.30 on a midsummer’s night and, assuming no diversions into the rough, finish in a manageable gloaming.

Being an island, Ireland has an abundance of links courses but also some truly beautiful parkland venues.

The K Club in Kildare and Mount Juliet in Thomastown, Co. Kilkenny come to mind.

In the case of the latter, there is a claim that this is the best parkland course on the island. Well, it was designed by Jack Nicklaus so that’s an argument that would be difficult to refute.

Druid’s Glen in County Wicklow is definitely worth a visit. Killarney, which I have battled my way around, is for sure another as is Adare Manor in County Limerick.

The aforementioned Woodbrook, which hosted a number of Ireland’s top tournaments in the 1960s and 1970s, is beside the Irish Sea but is rated a parkland course because it is fronted by mud cliffs.

The wind has had its wicked way with some of the course trees, not least pines that end up leaning this way and that.

Sometimes, with a quick glance at certain corners of the course, you would actually be reminded a little of Pebble Beach.

It is probably fair to say that the American golfer, when thinking in terms of an Irish foray, first and foremost considers a links.

No shortage of those of course. From those northern bastions mentioned above come on down the coast stopping at Rosses Point in County Sligo, Lahinch in Clare and also in the Banner County, Doonbeg and its mountainous dunes.

Doonbeg has Greg Norman’s name on the designer credits. He is reputed to have turned up, cast an eye over the landscape only to proclaim that there was nothing he could do here that God had not already done.

Having played Doonbeg, I would confidently second that assertion.

Having played it in a fresh Atlantic wind I would throw in the devil himself for good measure.

Down the coast a bit there is mighty, and mighty famous, Ballybunion with that opening tee shot that invites you to land your ball in a cemetery.

A fitting metaphor for my game so when I stood on the tee I made sure that I aimed well left of the headstones.

Waterville in County Kerry is another course to tackle. This was the late great Payne Stewart’s home from home. He used to tend bar in the clubhouse and was proclaimed honorary captain.

There is a statue of Stewart at Waterville that is the Irish match for the bronze that can be viewed at Pinehurst in North Carolina.

The Waterville website mentions that less than one percent of the world’s golf courses rate as true links courses, and that 85 percent of them can be found in Ireland and Britain.

Waterville asserts that it is the greatest links in the Republic, while granting the title to Royal County Down in Northern Ireland.

There would be argument over that of course, but both courses are for sure prominent in said argument.

Closer to Dublin there are a fair few fine links tracks, notably Royal Dublin and Portmarnock, while down the coast a bit, in County Wicklow, there is a true gem called the European Club.

But what of that as yet unnamed course so beloved by those peripatetic American eyes?

Many years ago, the great journalist and broadcaster, Alistair Cooke, spun out a tease on television.

At the end of the broadcast he promised that he would deliver his verdict on the woman that he believed was the most beautiful in living memory.

Well, he went this way and that until the very end at which point he proclaimed his belief that the actress Ava Gardner was his one and only.

Such a proclamation was certain to inspire debate of course.

And Irish golfers will spend many a long evening arguing for this course and that course – and never quite reach a conclusion.

But this assertion is based on the verdict, arguably more objective, of a slew of American golfers who have played this course, or have simply clapped eyes on it, and who have come within earshot of yours truly while announcing their verdict.

So this jury is in.

To describe it as the “best” course is not applicable because that invites subjective argument from here to eternity.

But to describe this course as being the most stunning sight in the most spectacular setting invites greater consensus.

So without further ado….Well, with just a little because the reader can have a moment to guess.

The course in question can be found on a clenched fist of land off the Cork coast.

I am speaking (of course!) of Old Head.

This promontory peach has prompted a unanimity to a degree and pitch that I have not heard applied to any other golf course in Ireland, and from some, the world.

Readers might beg to differ, but best to do that after playing Old Head which is just a few miles from Kinsale.

In a way, Old Head is itself a metaphor for the entire island when it comes to golf.

Both metaphor and reality share their other worldly and spectacular natures.

And that’s beyond any argument in any club house bar.

We will be reminded of this very soon with the Irish Open at Portstewart, and again two years from now when The Open returns to Royal Portrush.

Now that’s a tough one but I suspect that the “craic,” as they say, might just be a little mightier in Hibernia than Caledonia.

Ray O'Hanlon is the Editor of the Irish Echo newspaper in New York.