The northern most county’s saying is “Up here it’s different”--- that it is and certainly beautiful. 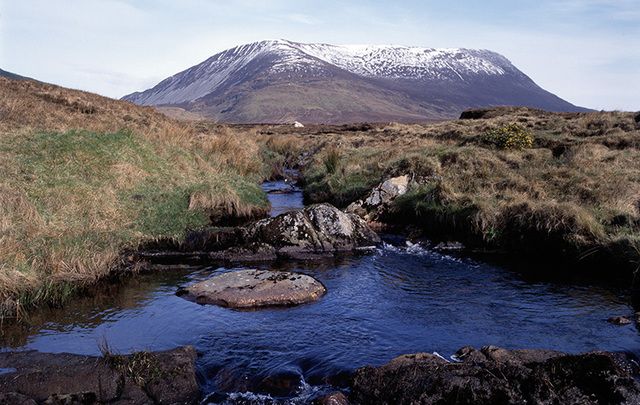 The highlands of Donegal, in winter: The northern most county’s saying is “Up here it’s different” that is it is and certainly beautiful. Tourism Ireland.

County Donegal’s motto is “Up here it’s different” and the most-northern county in Ireland is certainly the wild-child of Ireland. In this windblown county, you’ll find numerous amazing tourist attractions from mountains, to lakes, the Wild Atlantic Way drive, castles, and historic landmarks.

Located in the province of Ulster the county is mostly mountainous with two main ranges of low mountains, the Derryveagh Mountains in the north and the Bluestack Mountains in the south. To the south is where the famous Mount Errigal came to be found measuring 749 meters (2,457 ft) the highest peak.

Its famed coastline, battered by the Atlantic Ocean, is deeply indented and full of natural sea loughs including Lough Swilly and Lough Foyle. The Slieve League cliffs are the sixth-highest sea cliffs in Europe, while Malin Head is the most northerly point on the island of Ireland.

Slieve League is a mountain right on the coastline of Donegal. Measuring 601 meters (1,972 ft), Slieve Leauge has some of the highest sea cliffs in Europe and while less famous than the Cliffs of Moher, in County Clare, Slieve League's are almost three times higher.

The interactive heritage center tells the story of Donegal, from the community who have survived from the Great Hunger right up to the present day. The center also helps explain the road to peace in Northern Ireland, Ireland in the ‘Celtic Tiger’ years and the most recent economic collapse.

Just of the buildings in the Famine Village include the Orange Hall, Presbyterian Meeting House, Mass Rock and Hedge School and a Republican Safe House. The Village illustrates the diverse history and culture of this corner of the Inishowen peninsula.

At the center of Glenveagh National Park is Glenveagh Castle, a late 19th-century castellated mansion, which was built as a hunting lodge. The house is surrounded by renowned Gardens, boasting a multitude of exotic plants whose luxuriance contrasts starkly with the surrounding barren landscape.  The Walled Garden is a horticultural masterpiece, as are the Italian Terrace and Tuscan Garden.

The house, between 1870 and 1873, and its gardens are situated on 165.4 km² (40,873 acres) of parkland including the Derryveagh Mountains, lakes, glens and woods and even a herd of red deer. In the past Hollywood stars such as Marilyn Monroe, Clark Gable, Charlie Chaplin, and Greta Garbo vacationed at the castle. 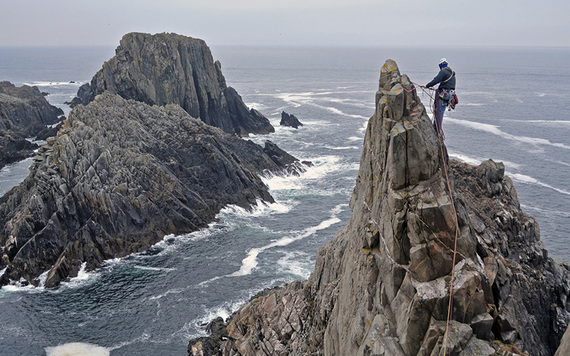 Malin Head is the most northerly point of the island of Ireland. The outpost of the Inishowen Peninsula is best known for its weather station and mentions in almost all forecasts.

Banba's Crown on the Head is actually the most northerly point on Malin Head. It is named after one of Ireland’s mythical queens. 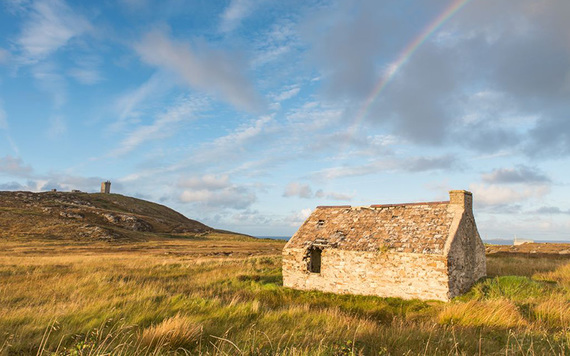 The first lighthouse on the island was put into operation in 1813. In 1805 a military watchtower was built on the head during the Napoleonic Wars. In c. 1902 a signal station was also built. Both of these structures are still standing today.

The shoreline around the coast illustrates how Ireland’s coastlines have developed over some 15,000 years, from the time when the glaciers melted to the present day.

Located at the center of Donegal town is the 15th century Donegal Castle. Until the late 1990s the castle, on the banks of the River Eske, stood in ruins but has now been extensively restored.

The castle was built by the O'Donnell chieftain in the 15th century and had extensive 17th-century additions by Sir Basil Brooke. It was built in the style of a rectangular keep with a later Jacobean style wing and surrounded by a 17th-century boundary wall.

The castle was the stronghold of the O'Donnell clan, Lords of Tír Conaill and one of the most powerful Gaelic families in Ireland from the 5th to the 16th centuries. In 1898 the then owner, the Earl of Arran, donated the castle to the Office of Public Works and it is now open for the public to enjoy. In fact, in May 2016 the Prince of Wales and The Duchess of Cornwall, Charles, and Camilla, took a trip during their official visit to County Donegal.