An EPIC 1,500 years of Irish history at the world’s first fully digital museum

Discover the stories of those who left Ireland and influenced the world at EPIC The Irish Emigration Museum. 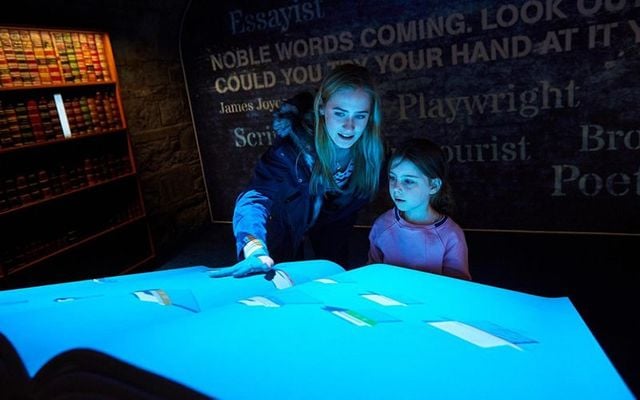 Over the centuries, some 10 million people have left the island of Ireland. Visit EPIC The Irish Emigration Museum in Dublin to find out about the Irish people who traveled the globe.

It’s a great time to visit Dublin, as National Geographic Traveler recently named the city one of their Best Trips 2018, and chose EPIC among its Top 10 Things to Do – “It’s simply too good of a story to miss”.

Voted one of TripAdvisor's Top 5 Irish Museums, EPIC is the world’s only fully digital museum. The 20 interactive galleries tell the fascinating stories of over 300 Irish people, past and present, and relive some of the greatest achievements and accomplishments in the world of sport, music, art, culture, politics, food, fashion, and science.

A portrait of President John F. Kennedy - one of the Irish American luminaries featured at EPIC.

With 70 million people now claiming Irish heritage and ancestry, there are also tales from Australia, Britain, Canada, continental Europe, New Zealand, Latin America and around the globe. EPIC looks at the reasons why people left and explores how the Irish shaped the world they found.

Museum Curator Nathan Mannion is often surprised by the reaction from visitors. “On the one hand, there is a fun side and you see people trying out Irish dancing or listening to extracts of classic Irish novels in the library. In other galleries, sometimes people get emotional as they make that deep connection with their Irish roots,” says Mannion.

EPIC’s location on the banks of the River Liffey in Dublin’s Docklands is also woven into Ireland’s sometimes turbulent past. This was the departure point for many Irish emigrants when they left their homeland during the Great Famine of the mid-1800s. Nearby are the haunting Famine memorial sculptures and the Jeanie Johnston tall ship, both representing that tragic chapter.

Naturally, as a key part of the Irish story the Famine is featured at EPIC, but the experience delves into a much broader historical tapestry. The museum itself is in the vaults of the newly-restored CHQ building, originally a wine and tobacco warehouse, which dates back to 1820.

EPIC also houses a state-of-the-art genealogy centre, the Irish Family History Centre, to help visitors explore their Irish ancestry. During a visit earlier this year, Prime Minister of Canada Justin Trudeau discovered his Irish roots, dating from the 17th century. Through his mother, Margaret Sinclair, Mr. Trudeau is a direct descendant of the Bernard family from Bandon, County Cork.

“Really, EPIC is for anyone with an interest in Ireland and its stories. It’s an ideal first stop for people visiting Dublin to get an insight into Irish people and culture, and to get a sense of where we came from,” says Mannion.

For more information and to buy tickets to the museum visit EPICCHQ.com.