Creating a flow chart is not as difficult as it used to be!

In partnership with:
Zen Flowchart 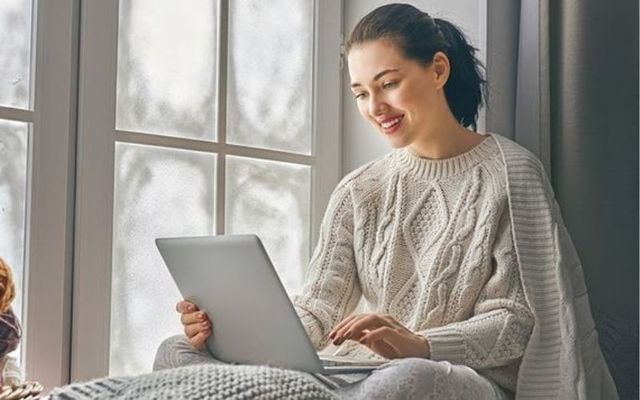 Creating a flow chart is not as difficult as it used to be. Instead of whiteboards and an endless colorful parade of sticky notes, you can instead opt to spend your time, effort, and even money on software that can create a more professional flow chart.

Human resource officers use flowcharts to show off the robust organization chart and explain the careful chain of command in some larger companies. After all, a clear command structure can help employees make wise decisions without going to too many others for advice or guidance.

Programmers find flowcharts exceptionally effective for planning how their systems or applications should work. If you are a mid-level or high-level programmer looking for a way to envision the experience of your application, a flowchart is a great way to start.

Flowcharts even do well in the healthcare industry, where they are an effective way to break down complex ideas and treatment plans for patients.

Gone are the days of the flowchart with the chicken scratch handwriting and the color codes that might wildly vary.

Instead, you have the chance to find software that works with your needs as you chart a course (pun very much intended here) with your next team organization chart or long-term project milestones.

Let us look at some of the winners that should set you up for success. 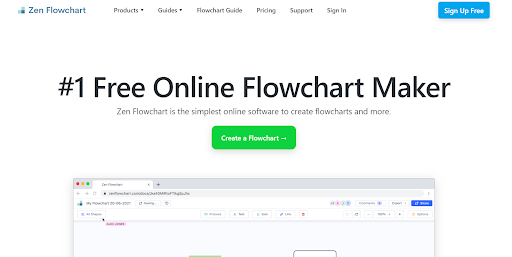 We will start with one of the best right out of the gate. Do you need a cloud-based flow chart creator with a robust feature set and collaboration tools? Say no more, friend. Instead, say hello to Zen Flowchart.

Instead of bloated software on your computer, Zen Flowchart is a web-based flowchart maker software designed for those who need something simple and can display complex ideas.

With its 1-click design features and drag and drop shape library, Zen Flowchart is the flowchart creation tool for people who view saving time as the most valuable investment in a piece of software.

The best part is that Zen Flowchart offers free accounts for newbies. You will pay an annual (or monthly) fee for the more robust features, but free is a great way to get your foot in the door. You can get an individual account or one for your enterprise, too.

Being part of Zen Flowchart’s subscription services means you will never have to worry about software updates. If you are using the web-based service, you are already using the most up-to-date version. Who can argue with that?

Speaking of enterprises, companies like Apple, Google, LinkedIn, Spotify, and Facebook have all used Zen Flowchart in their business efforts.

If you require a simple and free flowchart maker, Zen Flowchart is a wise place to start.

You have likely heard of Figma if you work in the creative world. Figma is another web-based and desktop-based design system. While Figma’s goal is to provide users with a creative sandbox for individual users and collaborators, it does have a flow chart creator tool.

Figma’s strength is its ability to function as a piece of enterprise collaboration software and a full-on design and photo editing system. That also makes it more catered to marketing and art teams.

You are also getting a system that saves natively to the cloud, so if you are working on a project at the office and want to access it at home, you can do so without issue. Figma also offers a downloadable version of its software if one of those folks prefers to work without the cloud.

But there are Figma issues to contend with as well. Many complain that Figma’s high learning curve can turn off even the most seasoned designers, especially from Adobe’s Creative Cloud suite.

With Figma being a web-based piece of design software, computers with low memory may also struggle with using browser-based software.

Like many of the other tools you will see in this list, Figma comes as a free system with limited capabilities or can be used for a monthly fee depending on the number of users.

Another web-based system, Wondershare EdrawMax’s Flowchart Maker is part of their suite of diagramming software. On top of Flowchart Maker, you can access other diagramming systems that allow you to create anything from organization charts to timelines and anything in between.

Flowchart Maker, meanwhile, is a more focused part of the software that focuses on creating simple flowcharts. The system’s diverse array of templates and diagramming symbols allows you to complete your vision for a flowchart.

Flowchart Maker is downloadable to your desktop or laptop if you enjoy working offline.

However, with Flowchart Maker being part of a software suite, be prepared to pay a premium in upfront costs. You can either go with an annual plan or a lifetime plan. Either option is worth several hundred dollars.

EdrawMax has been around for several years, with reviewers complaining that the system has changed little since its inception. Even with those issues, a limited free trial only lasts 7 days.

Still, EdrawMax is one of the most well-known flowchart creation tools on this list so it may be worth that initial upfront investment.

Another day, another web-based diagramming solution with a spiffy-sounding name. Introducing Gliffy – a diagramming software that can create flowcharts on the fly.

With simple drag and drop mechanics, Gliffy is an easy way to share and collaborate with others on your team when you’re trying to make a flowchart. You can also import other charts and export them with ease.

Gliffy also boasts of support for Atlassian apps to make endless amounts of visually appealing diagrams and flowcharts for the enterprise-minded.

You can start with a 2-week free trial of Gliffy, but of course, you’ll eventually have to purchase into their ecosystem. Enterprise users will have to contact the company for a quote depending on the size of your company and team.

However, some reviews claim Gliffy is not as user-friendly as many of the other options on this list and their importing features leave much to be desired. Others have complained of color choices and a less-than-ideal selection of shapes.

Miro is not just the name of a popular professional wrestler – it’s also the name of a live diagramming system with easy-to-use features, wonderful design aesthetics, and smooth collaboration options.

Miro gives you power over your flowcharts and the ability to make changes on the fly with fellow team members watching. It’s another way to work closely with other members of your organization to make the best and most up-to-date flowchart possible.

Miro also boasts of its template collection that can put you on the right track the minute you select one.

With all of Miro’s seemingly endless array of options, that can also be quite intimidating for some users who have never picked up the software before. Many users have complained that the software needs better documentation and “hand-holding” to get them over the hump and more comfortable.

The software starts as a 100 percent free service but becomes paid once you begin adding more and more flowcharts, projects, and team members to your account.

Canva might be more well-known on this list as a service that allows you to create impressive social media graphics on the fly, but it can also create flowcharts.

Starting with a simple free option and moving into more expensive options with more creativity and templates, Canva is a fairly simple piece of software.

Canva users can begin making graphics and flowcharts from many of the available templates and go straight to work. The simple drag and drop interface doesn’t dominate your screen and gives plenty of preloaded options and the ability to import.

Canva has expanded beyond its initial offering, going further into enterprise and collaborative tools that allow for live editing and brainstorming sessions. There’s nothing like watching your team members work while at a Zoom meeting.

Despite Canva’s coda as a simple piece of design software, many users have still complained about its learning curve – especially for new users. On the flowchart design side, Canva users are also limited by the preloaded shapes. Other shapes can be imported, but many are seeking a one-stop-shop approach when creating a complicated flowchart.

One of the newer options on this list, ProcessOn is another piece of collaborative design software that allows for what they call mind mapping. Really, though, it’s just another way of saying it can create flowcharts.

The software company boasts of the number of templates they have on top of their real-time collaboration system. “Simple and easy to use” is also another phrase they enjoy using to describe their experience.

ProcessOn also allows you to create templates and themes that can work across multiple projects in your company. There’s nothing like creating a theme to work in everyone’s favor and even bringing a smile to the intra-office communication crowd.

ProcessOn comes with two options for users when it comes to pricing: a limited free option that can work in a pinch and an enterprise-oriented one for larger teams.

However, many who use the software complain that ProcessOn is limited by its functionality and lack of plugins for other services. ProcessOn also only supports English and Chinese at this time, narrowing the scope of the software to those who can speak or read those languages efficiently.

Here are some of the most common questions.

What is a flowchart software?
It is a program that can create a sequence of interconnected boxes and diagrams that highlight order, hierarchy, and structure.

What’s the main use of a flowchart?
They are often used to highlight a process or algorithm. In other case studies, they can also help to easily locate complex connections between activities and actors.

What are the five most common uses of a flowchart?
Programming, process documentation, troubleshooting, workflow management, and quality management.

What are the main benefits of using a flowchart?
A flowchart helps to analyze processes and spot mistakes or errors easily. They can also synthesize information in a visual way that makes it easier to understand.

What is the best flow chart creator?
Zen Flowchart

What is the easiest software option?
Canva is the more friendly option.

Can you create a flowchart in PowerPoint?
If you go to the smart art in the design features, there are several options to use smart art graphic boxes and create a chart

Can you create a flowchart in Microsoft Word?
In the insert tab, there are several options with flowcharts. This is clearly not the best alternative when using Microsoft programs.