Tyson Fury, aka the Gypsy King, took to his Instagram this week to give Daniel Kinahan a "massive thanks" for organizing his upcoming fight with Anthony Joshua. 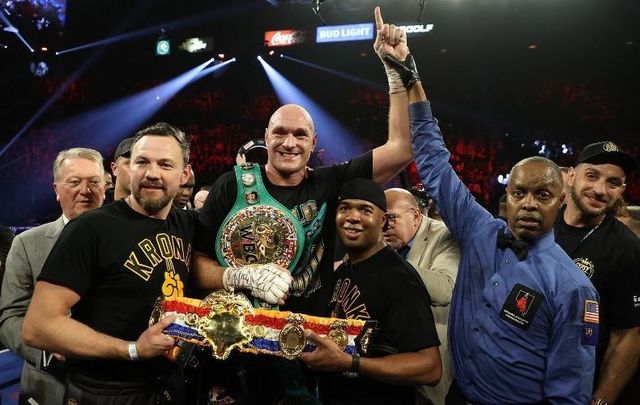 Tyson Fury celebrates his win by TKO in the seventh round against Deontay Wilder in the Heavyweight bout for Wilder's WBC and Fury's lineal heavyweight title on February 22, 2020 at MGM Grand Garden Arena in Las Vegas, Nevada. Getty

WBC Heavyweight champion Tyson Fury will fight Anthony Joshua in two boxing super fights next year thanks in no small part to the efforts of Daniel Kinahan, a senior figure in one of Ireland's most dangerous drug cartels.

Tyson Fury, "The Gypsy King," took to his personal Instagram account on Wednesday to announce the unification title fight and thank Daniel Kinahan for "making this happen."

Kinahan co-founded the MTK management company that represents Fury and, while he is no longer with the company, he still represents the Gypsy King in an advisory capacity.

Fury gave "a big shout out to Dan" who "literally got this done" in his Instagram video on June 10:

Most British boxing fans, who were delighted that two of the sport's most high-profile fighters were finally set to face each other, paid no heed to Kinahan who, at best, was a small side story in this huge piece of sporting news.

A significant number of fans actually replied to Fury's post by praising Kinahan for making this long-awaited fight finally happen.

Most British fans are oblivious to the vicious and murderous feud ongoing between the Hutch and Kinahan gangs in Ireland.

The reaction in Ireland was drastically different.

The reaction among Irish pundits and sports fans ranged from bemusement to genuine shock as several reputable British publications heralded Kinahan as a "Dublin businessman" and a pivotal figure in bringing this fight to life.

Some Irish publications reacted to the news with pure anger. The Irish Daily Star. for instance, published an op-ed stating that they would not be covering the fight due to Kinahan's involvement.

Tomorrow’s @IsFearrAnStar comment. We’ve always been a boxing paper, but we will refuse to give publicity or coverage to the Fury -Joshua fights. #danielkinahan pic.twitter.com/r9Rptt89oy

Irish politicians have reacted with similar outrage to the news.

Speaking in the Dáil on June 11, Labour Party leader Alan Kelly called on Taoiseach Leo Varadkar to stop the Fury-Joshua fight from being used to "whitewash" Daniel Kinahan's name. Kelly said that the fight was a disgrace and said that Ireland should raise diplomatic concerns with the United Arab Emirates, where Kinahan currently resides.

Varadkar said that he was taken aback by Fury's comments and said that there has been contacting between the Department of Foreign Affairs and authorities in the UAE over Kinahan today.

(You can watch TD Kelly's question, followed by Varadkar's response, from 5:30 in the video below:)

Kinahan currently resides in Dubai due to a legitimate threat on his life from a rival drug gang. He is also the subject of a number of international police investigations.

The Dubliner was previously described in the High Court as a senior figure in international organized crime and the Criminal Assets Bureau said that he "controlled and managed" the Kinahan Organized Crime Group.

That criminal organization has been involved in a gangland feud with the Hutch gang for a number of years in a violent war that has claimed the lives of at least 20 people.

The feud began in 2014 when rival gang leader Gary Hutch sent a contract killer to murder Kinahan in Spain. The attack was botched and British light-middleweight boxing champion Jamie Moore was shot twice non-fatally instead.

The Kinahan's subsequent attempt to assassinate Gary Hutch in September 2015 also failed before a massive escalation in violence the following year.

In February 2016, the feud rose to national attention when the Hutch gang sent a hit squad to take out Daniel Kinahan at a boxing promotion event at the Regency Hotel in Dublin.

The Kinahan reprisals were brutal.

Kinahan gunmen killed Eddie, Gareth, and Derek Hutch among more than a dozen victims and gardaí were forced to offer round the clock protection to Hutch gang members to prevent further assassinations.

Trevor O'Neill, a completely innocent father of three, was killed by Kinahan gunmen in Spain simply because he was in close proximity to their target.

A significant number of Kinahan gang members have been arrested and Daniel Kinahan has lived in Dubai for a number of years.

Aside from their vicious feud with the Hutch's, the Kinahan gang is also believed to be one of the key players in the European drug trade.

A study compiled by the EU Drugs Agency and European law enforcement agency Europol in November 2019 claimed that the Kinahan cartel stretched all over Europe and that it had recently been expanded into Australia and New Zealand.

The gang is believed to primarily deal with cocaine.