Dubliner Eoin Morgan captained England to their first Cricket World Cup victory as they defeated New Zealand in a super over after Sunday’s final at Lord’s in London was tied. 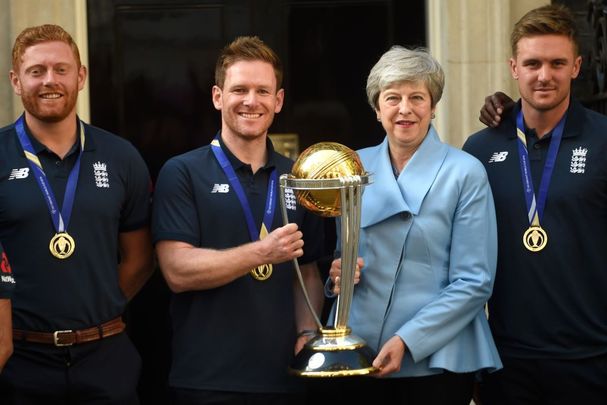 Jonny Bairstow, Eoin Morgan, and Theresa May pose with the Cricket World Cup at Downing Street on July 15, 2019, in London, England. Photo by Peter Summers/Getty Images

Dubliner Eoin Morgan captained England to their first Cricket World Cup victory as they defeated New Zealand in a super over after Sunday’s final at Lord’s in London was tied.

Speaking with the trophy at his side at the post-match press conference, Rush native Morgan said, “This means absolutely everything. It’s been an absolutely incredible journey. I still can’t quite believe it, that’s why I’m carrying it around as much as I can.”

Born in Ireland where his father is from, Morgan's mother was English and from the age of 13, he knew that he wanted to play cricket for England, despite playing for Ireland at a youth level.

Morgan has proved himself to be a worthy captain both on and off the field with reports that he kept his team in check at they visited 10 Downing Street to celebrate their victory.

“Look, guys, we’ve got to calm it,” he told them, according to The Daily Telegraph’s account of the reception.