Did your Irish relative serve in World War II? This group wants to hear from you

The Kilkenny Great War Memorial Committee is looking for men and women from the area who served in World War II. 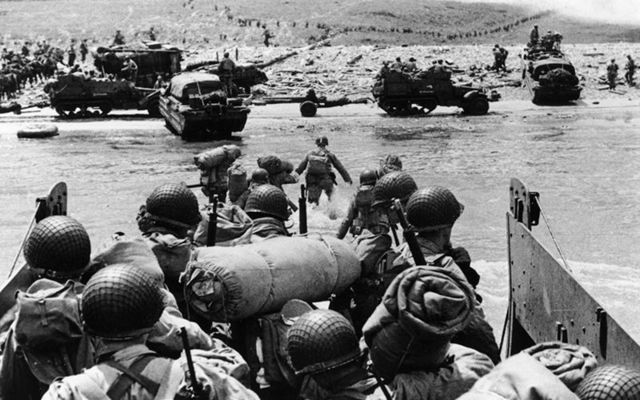 The Allied Forces landing on the beaches of Normandy, on D-Day on June 6, in 1944. Getty

The Kilkenny Great War Memorial Committee is looking for men and women from the area who served in World War II.

The group wants to honor veterans with a memorial and is asking family members to provide them with the names of Kilkenny men and women who served in the war.

So far, the committee has received 58 names of those who died in the war and 127 survivors.

It is believed that there are at least 100 dead and 1,000 survivors from Kilkenny, the Irish Examiner reports.

Committee member Donal Croghan said that they are appealing to Irish both at home and abroad.

"We are running the appeal to get to a wider audience on a nationwide and international level who have Kilkenny connections.

“While we’ve received hundreds of emails and phone calls from relatives of those who fought, there have to be hundreds more because the attrition rate in World War II was much lower than in World War I. So if we have 58 who died then there should be about 1,000 who served you'd imagine.”

Croghan said that despite Ireland’s then taoiseach Eamonn De Valera's policy of neutrality, "he allowed Irishmen to freely join the Allied armies, which up to 40,000 did, along with 200,000 civilians who crossed over to Britain to work in the mines and factories.”

"Many were also conscripted into the British Forces.

“Information on the exact number of people from Ireland who died in World War II varies from 4,468 others 9,100. Bernard Kelly who wrote, Returning Home: Irish Ex-Servicemen after the Second World War, estimates 12,000 Irish veterans returned to Ireland at the end of the war.

“They were treated very poorly after fighting Hitler’s armies and they were scorned and treated with hostility, seen by many as anti-national and almost traitorous.”

If you know someone from Kilkenny who served during War War II, you can contact the committee by phone at (00353)863369080, by email to kilkennywarmemorial@gmail.com, or by mail to 48 John Street, Kilkenny.