England World Cup star could have played for Ireland

Jude Bellingham, who has played a key role in England's run to the World Cup quarterfinals, could have played for Ireland thanks to his Irish grandparents. 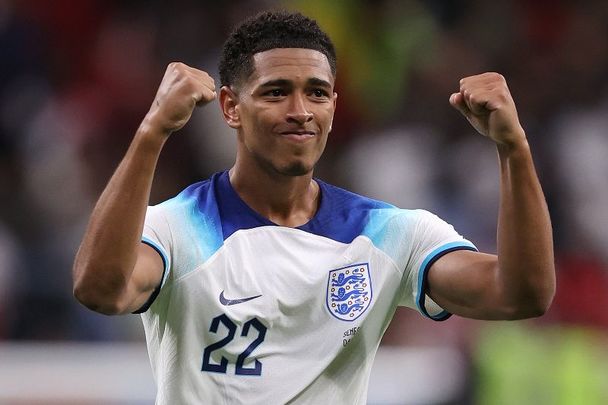 December 4, 2022: Jude Bellingham of England celebrates after the team's victory during the FIFA World Cup Qatar 2022 Round of 16 match between England and Senegal at Al Bayt Stadium in Al Khor, Qatar. Getty Images

England midfielder Jude Bellingham has lit up the FIFA World Cup with his performances for England over the past three weeks, but the talented 19-year-old could have lined out for Ireland.

Jude Bellingham, who plays for Borussia Dortmund in Germany, has been one of the stars of the World Cup and is being linked with a $158 million move to some of Europe's biggest clubs.

Bellingham has played a key role in England's run to the World Cup quarterfinals, scoring their opening goal of the tournament in a 6-2 win over Iran and brilliantly setting up their first goal in their round-of-16 win over Senegal.

However, a short documentary about Bellingham's career so far has left Irish fans wondering about what could have been.

One image included in the short video features a young Bellingham sporting an Ireland away jersey from the mid-2000s, leading fans to question whether the English star had Irish roots.

Although he's English, this is what we could have had.

His father Mark Bellingham confirmed as much in a tweet from September 2020 while watching his son make his debut for Borussia Dortmund.

"This half-Irish kid is going to go online and watch his mixed race England u21 International son make his competitive debut in the German Cup," Mark Bellingham wrote on Twitter in September 2020.

Anyway, it's been enjoyable but this half Irish kid is going to go online and watch his mixed race England u21 International son make his competitive debut in the German Cup.

Bellingham could have played for the Republic of Ireland thanks to his Irish grandparents but seems to have only ever had eyes for England as he never represented Ireland at youth level.

Bellingham is by no means the only player in the current England World Cup squad to boast an Irish connection.

Jack Grealish and Declan Rice both represented Ireland at underage levels, with Rice even playing three friendly internationals for Ireland before switching allegiances to England in 2019.

England's captain Harry Kane qualifies for Ireland through his Irish father and boasts the strongest link to Ireland of any English player. The Tottenham forward reportedly spent several summer holidays in his father's native County Galway but never represented Ireland at youth level.