Setting out to discover your Irish ancestry? Here's how to trace your Irish roots in Ireland. 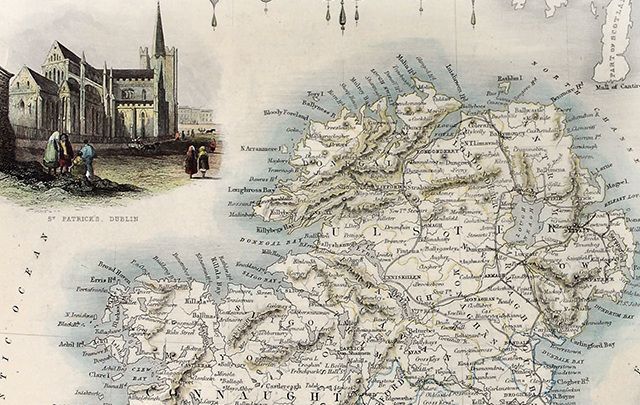 Setting out to discover your Irish ancestry? Here's how to trace your Irish roots in Ireland.

The Irish love to claim their own. And boy, they love a welcome home party. So you can imagine the ‘craic’ in the west of Ireland the day some years ago when Muhammad Ali dropped in on Ennis, Co Clare.

The greatest sportsman of the twentieth century, no less, ‘The Greatest,' in Ireland to discover his Irish roots.

Ali’s 2009 trip was one of the great Irish homecomings. Thousands lined the streets to cheer his motorcade as the three-time heavyweight champion of the world visited the house of his great-grandfather Abe Grady.

Not usually thought of as card-carrying Irish, in actual fact the African-American boxer’s ancestor emigrated to the US from Ireland in the 1860s, later marrying a freed slave in Kentucky. One of their grandchildren, Odessa Lee Grady Clay, gave birth to Ali – then called Cassius Clay – in 1942.

Of course, Muhammad Ali is by no means the only global figure Ireland can claim. The former President of the United States of America, no less again, accepted his green card when he traveled to Ireland in May 2012 to drop in on his ancestor’s place in Moneygall, County Offaly. This is where Obama’s great, great, great grandfather on his mother’s side, Falmouth Kearney, emigrated in 1850, aged 19. He was a shoemaker.

The story of ‘O’Bama’s’ arrival on the Emerald Isle flashed around the world, no doubt stoking up root-searching pangs in the multitudinous Irish diaspora who wanted to follow suit – this was also the case when two of the US president’s illustrious predecessors made it back: Ronald Reagan showed up at his family’s native Ballyporeen, County Tipperary in 1984 and in 1963 John F Kennedy returned to Dunganstown, County Wexford.

Actually, every single president since Kennedy and until Donald Trump has had Irish roots and of the 45 US presidents to date, an astonishing 21 of them can trace back to the ‘oul sod.' Many were Scots-Irish Presbyterians who emigrated in the seventeenth and eighteenth century from what is now Northern Ireland, mainly ending up in the US southern states.

Who Do You Think You Are?

Given the success of Obama and Ali, everyone has a fighting shot at their roots-- and it is getting more popular these days.

Nobody knows if Obama or Ali have ever watched the TV series 'Who Do You Think You Are?' If they did they’d find a ton of fellow celebrities searching out their family histories. It’s quite the latest thing, and the show, hugely popular all over the world – America, Canada, Australia, Germany, Sweden, Norway, Denmark, Poland, Norway, Britain, and Ireland – is helping to power something of a genealogical revolution.

In one episode of the American version ‘Queen of Nice’ chat-show host and comedienne Rosie O’Donnell made an emotional and life-changing trip to Ireland in search of her roots. Unlike Ali and Obama, O’Donnell always knew her family had Irish blood. But her mother died when she was 10 and she and her four siblings never knew where her maternal family came from and why they left Ireland.

American census records led O’Donnell to ancestors in Canada, and in a stroke of Irish luck, she discovered the big ‘location’ clue she’d been looking for in Montreal. Her great, great grandmother died in a horrific accident there in 1876. A newspaper’s death notice revealed she came from County Kildare.

Once in Ireland, at the Kildare County Library, it proved possible for O’Donnell to find and hold in her hand a document stating that her great, great grandfather Andrew Murtagh, his wife Ann, and four children had been in penury in a workhouse. The document showed they’d had their passage paid to Canada by the poor law union in the 1850s, thus escaping, by the skin of their teeth, the ravages of the Great Hunger – the famine that hit Ireland in 1845 causing the death of over one million and emigration of millions more.

“Public interest in family history and genealogy is at an all-time high,” says Rachel Murphy from the Irish professional genealogical research company, Eneclann. Its experts have worked with TV shows such as 'Who Do You Think You Are?' and 'Faces of America'.

“More and more records are going online, such as the 1901 and 1911 censuses, which were completed by the householder, so if your ancestor was literate it means you can see his or her handwriting,” adds Murphy. “The technology of the internet is transforming family history research and making important sources much more accessible.”

Eneclann’s advice to those hoping to trace their Irish connections is to begin by talking to your own family. Build up a picture. The key to making a fruitful trip back to Ireland will be advance research in your home country that – like O’Donnell’s case – reveals a place of birth in Ireland for your immigrant ancestor. Death records, military enlistments, tombstones, church records, newspaper obituaries, passenger lists and naturalization papers are among the many sources that can reveal the Irish birthplace.

Armed with a place – ideally a parish or townland – hit the internet. Free access to many of the major sources of records is now available online. For instance, the National Archives of Ireland website hosts the 1901 and 1911 censuses, FamilySearch hosts indexes to the civil indexes to births, marriages, and deaths, some parish records are available at the government website irishgenealogy.ie, and the Ask About Ireland website hosts what’s called Griffith’s Valuation – an important property tax survey carried out in the mid-nineteenth century. The Public Records Office of Northern Ireland has a number of street directories, with calendars and other information on their website and the National Library of Ireland has photographs online. Many other official records are being launched regularly as they become digitized.

One of the most important online resources is the Irish Family History Foundation site, www.rootsireland.ie. It’s a coordinating body for a network of government approved genealogical research centers and has the largest database of records They have a presence in almost every county in Ireland (north and south) and you can arrange to meet with a local expert no matter where your family is from when you come over. Searching is free, but there is a charge to see the details of the retrieved records.

Consider also the option of commissioning professionals like Eneclann to do the work for you, or check out the Association of Professional Genealogists in Ireland. Another idea is to contact operators that provide an entire family history experience. For instance, Irish Ancestral Holidays provides a team of travel, genealogy, hospitality and history experts in Ireland that create vacation plans around Irish roots tracing.

Reliving your family’s history in Ireland is a very personal experience. But setting foot in your ancestral area, learning about how your family lived and why they left can be extraordinary.

Even if the house no longer stands, just to be on the site it once occupied, to visit a church or headstone, or simply travel through the ancestral landscape, townland or parish can be stirring. And to understand the life of your forebears there are a number of exhibitions and attractions in Ireland that depict the life of emigrants before they left. One, the Ulster-American Folk Park in County Tyrone follows the emigrant trail from the thatched cottages of Ulster to a full-scale emigrant sailing ship leading to the log cabins of the American Frontier with exhibits from both sides of the Atlantic.

Over 2.5 million fled the Irish Famine through the transatlantic port of Cobh (pronounced ‘cove’), near Cork. At the town’s heritage centre there are brilliant exhibitions and audio-video experiences where you can learn about ‘American wakes’ (bittersweet parties held on the last night at home before an emigrant left Ireland), see the actual possessions of famine emigrants and witness the horrifying conditions on board the early ‘coffin ships.'

The Irish National Famine Museum – one of the most important museums in Ireland – is another highly recommended visit. Set within the magnificent Strokestown Park House, County Roscommon, guided tours let you experience Georgian Ireland at the time surrounding the Famine from the perspective of the upper class and the starving tenant farmers.

Come and join the family

If you are one of the millions who have Irish ancestry there’s never been a better time to find your family connections and come home. You might be banjaxed at the extended family you’ll be joining. ‘Surprise’ personalities of Irish heritage include the likes of American screen star Robert De Niro. Always thought of as Italian, actually three of De Niro’s four grandparents were Irish, and the great man hitched around the Emerald Isle as a teenager.

Or how about young music hotshots Taylor Swift (Irish blood on both sides of the family) and Rhianna (father of Barbadian-Irish descent)?

Irish Americans in the no-longer-with-us category include Walt Disney and Jimi Hendrix (honest, mother was the daughter of a Cherokee Indian woman and an Irishman).

Leaving the shores of America for Australia and low and behold pop diva Kylie Minogue, and Oscar-winners Nicole Kidman and Mel Gibson are but three prominent Aussies with Irish roots.

Canadians too can claim plenty of Irish blood: 'Dawson's Creek' star Joshua Jackson (mother from Dublin) and wouldn’t you know a third of Canada’s 22 prime ministers to date, including Brian Mulroney and Paul Martin.

Have you had success tracing your Irish roots in Ireland? We'd love to hear your story! Tell it in the comment section.