"The Thing" removed from Dublin City Center after years of controversy

In a series produced by Gael Linn to promote the Irish language, we see "The Thing" finally be removed from O'Connell Bridge in 1964.

In partnership with the
Irish Film Institute 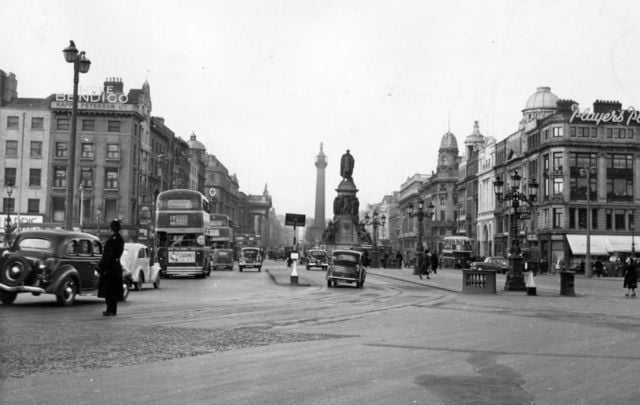 Captured in the Gael Linn collection, we see how Dublin finally rid itself of "The Thing."

Did you ever hear of "The Thing" that haunted Dublin's O'Connell Bridge? No, this isn't something out of a fantasy novel but a very real piece of public art in Dublin that was the subject of much controversy in the 1950s.

Much like the wrath that The Spire drew when it was erected on O'Connell Street on the turn of the millennium, The Thing was also much hated by some and eventually, it had to go.

The "Bowl of Light" or "The Thing," as it was more commonly known, was removed from O’Connell Bridge after a controversial ten-year tenure in Dublin.

The copper bowl sat in the middle of O’Connell Bridge and plastic flames lit up inside it. It was one of many public art installations around the capital, but no piece captured the attention of the public quite like "The Thing."

Built in 1953 for the Tóstal (an event aimed to help encourage visitors to come to Ireland as a tourist destination), it was one of many public sculptures that were located in Dublin from 1953 – 1958.

"The Thing" however was met with much controversy and disdain from its arrival and the removal of it was a cause of celebration for many. It was still vandalized and attacked on numerous occasions, even after several attempts to improve it (flowers were planted in it). Engineers declared it too heavy for the bridge and it was finally removed.

Produced by Gael Linn, Amharc Éireann (A View of Ireland) is Ireland’s longest-running indigenous newsreel series. It was distributed to cinemas throughout the country to promote the Irish language. Between 1956 and 1964, 267 editions of the newsreel were produced for cinema exhibition.

To see more of the Gael Linn Collection, click here.

Do you remember "The Thing" being in Dublin? Let us know in the comments section, below.