Jennie Hodgers who ran away to the US and became a soldier, Albert D.J. Cashier. 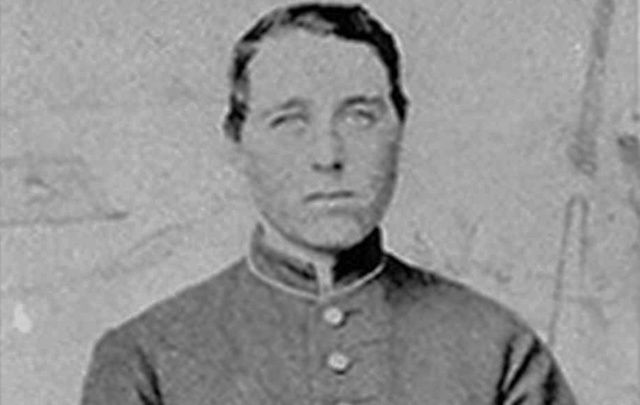 Ireland has produced many famous females who have made their mark in culture, politics and the arts. Many are household names but unfortunately some are not. In the case of Jennie Hodgers, she is better known by a different name.

Born on Christmas Day 1843, in Clogherhead, County Louth, to Sallie and Patrick Hodgers, Jennie left her native land as a stowaway dressed in men’s clothes at the age of 18 and ended up in Illinois.

Jennie arrived in America just as its Civil War began. In those days women could not join the armed forces but Jennie, who had travelled to America disguised as a male, changed her name to Albert D.J Cashier and joined the Union army on August 6 1862.

Jennie enlisted into the 95th Illinois Infantry and although she stood at a mere 5"3 and did not socialize well with the other soldiers, suspicions were not aroused as to the real identity of the small and quite soldier.

Jennie’s regiment fought in over 40 battles including the siege at Vicksburg and the battle of Guntown Mississippi where they suffered heavy losses.

In the heat of battle Jennie proved her mettle. While on a reconnaissance mission in Vicksburg, she was captured by a Confederate soldier. Jennie managed to grab her captors rifle and knock him unconscious with it before running away. Shortly after that at another skirmish, Jennie witnessed as her company’s flag was tore down by the enemy. She took it upon herself to retrieve the flag and climbed a tree under heavy fire where she hung it from a high branch. Throughout the war she displayed great bravery and miraculously managed to avoid any serious injury, a fact which helped her to maintain her identity.

On August 17 1865 Jennie was mustered out of the army and she returned to Illinois where she lived for over 40 years in the town of Saunemin. Because she was still living as a man called Albert Cashier she could claim a veteran’s pension. Jennie didn’t just live off her army pension, she took various jobs including a lamplighter, janitor and a dry goods clerk.

Jennie was proud of her war record and every year on Memorial Day she put on her uniform and joined in the local parade with the other veterans and continued to do so until she fell victim to an unfortunate accident in 1910.

Jennie was working on the local estate of Senator J.M Lish picking up sticks from his driveway when he hit her with his car. The accident resulted in Jennie being left with a broken leg and she was brought to hospital. When a doctor examined Jennie, he discovered her real identity but out of respect for the Civil War veteran he kept it a secret.

The broken leg had left Jennie with a bad limp and she decided it best to retire to the Soldier and Sailors Home in Quincy Illinois. Jennie still maintained her disguise but over a two-year period in her new surroundings she developed dementia and was moved to Watertown State Hospital for the Insane, where it was discovered the old soldier was not a man but a woman.

On March 29 1914, The Washington Post reported on the woman who posed as a man in the army. It went on to state the sad fact Jennie was committed to an insane asylum but reported how she had ‘participated in some of the bloodiest battles of the war and behaved with gallantry.’

At the asylum, Jennie was forced to wear women’s clothes, something she had not done in over 50 years. Jennie found it hard to wear the long dresses and one day she tripped over the long garment and broke her hip. While recuperating from that accident Jennie had also come under investigation from the Pension Bureau. This arm of the government had decided to revoke Jennie’s pension but with the aid of former comrades who claimed she had fought as tough as any man in the battlefield and was deserving of the pension, the government body backed down and let Jennie keep her well-earned pension.

On October 11th 1915 Jennie died at the age of 72. She was buried in the uniform of the 95th Illinois Infantry with full military honors in Sunny Slope Cemetery in Saunemin.

The historica home of Albert D.J. Cashier in Saunemin.

In the aftermath of Jennie’s death an article appeared in the Anglo-Celt newspaper of November 6th 1915 looking for heirs of Jennie to claim money she had left behind but none were found.

In 1977 the people of Saunemin replaced the standard military marker on Jennies grave with a much bigger one bearing the following inscription: