Memorial will stand close to church where founder of Glasgow Celtic served. 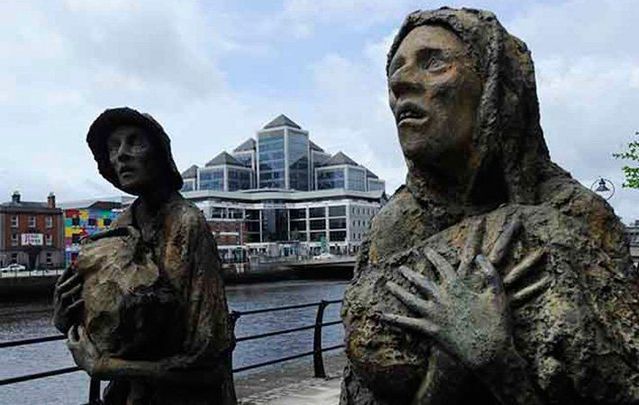 The Donegal sculptor John McCarron has been chosen to design Scotland’s first ever memorial to the Irish Famine.

Speaking to Donegal Now newspaper following the announcement, which was attended by hundreds in Glasgow, McCarron said he was “thrilled, delighted and honoured” his design had been chosen for the historic monument.

Donegal Now reports the Glasgow Famine Memorial will “feature three, thin, gaunt, emaciated, semi-abstract figures, one of them a woman holding a child, standing on top of a square, three-metre-high, stainless steel plinth-it will also feature engravings of a verse from the poem ‘The Stricken Land’ and the words “An Gorta Mór.”

McCarron stated: “The fact that my sculpture, ‘Tower of Silence’ will now stand outside Glasgow’s St Mary’s Church, Carlton, on the corner of Abercrombie Street, means so much to me.

“Don’t forget, this was the Church of Brother Walfrid who founded Glasgow Celtic Football Club, to feed the starving Irish people in Glasgow.

“But, more importantly, what I realised as I got more and more involved with the project and visited Glasgow and spoke and listened to the people who took part in the public consultation, was that the Irish community in Glasgow and throughout Scotland, has a deep emotional investment in the Coiste Cuimhneachain An Gorta Mór(Irish Famine Commemoration Committee) project.

“I am full of admiration for their drive, energy and ambition to get a fitting memorial erected, the first-ever in Scotland, to the Famine Irish.

“I am also thrilled, delighted and honoured Coiste Cuimhneachain An Gorta Mór chose my design, my vision for how the memorial should look. I am really looking forward to getting to work on the project now and hopefully we will see it in situ in 2019,” said John.