The tribe were destitute but were so moved by the stories of starving Irish they raised $4,000 in aid. 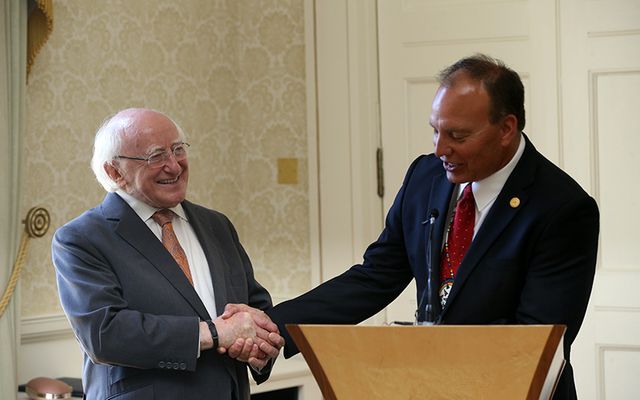 President of Ireland Michael D. Higgins has thanked delegates from the Choctaw tribe of Oklahoma for their generosity to the people of Ireland during the Great Famine.

Moved by stories of the starving Irish in 1847, tribesmen and women raised $170 to be sent to Ireland to help the hungry. Today such a sum would be worth $4,500.

At a reception in Áras an Uachtaráin (the President’s official residence) Higgins said that, “It was a gift of your ancestors to our ancestors who shared certain experiences - a gift of glowing compassion and solidarity which was offered at one of the darkest junctions in Irish history.”

Read more: A unique Choctaw Indian view of Ireland, the Famine and 1916

Chief Gary Batton said the event remained hugely important in the history of the Choctaw tribe.

“It is one of the stories that is always told about living out our values as Choctaw and remembering who we are,” he told journalists assembled at the Áras.

To this day he receives letters from schoolchildren in Ireland thanking the tribe for the gift.

At that time, the tribe was living in great poverty and their history was, like that of the Irish, one of eviction and destitution. Many times in their history, they were thrown off their land by settlers.

As such, the Choctaw people felt a connection to the people of Ireland and, Batton said, they both shared a “spirit of hope, a spirit of perseverance.”

Concluding his speech Higgins said, “May the friendship between our two nations, sealed so demonstrably 170 years ago endure into future.”